On the value of reputation

Update: Terence Triutt has been released from prison as innocent, charges dropped.

This year, I have started the series of articles about the criminal case of Terrence Truitt, pending now in Otsego County, New York, see my previous blog articles about this case here and here.

A man of color is charged with arson that has ALLEGEDLY led to a death of a local former firefighter, a white man.

In a city and area notorious for its racial bias and racial profiling in criminal cases.

Terence Truitt's reputation at this time - as well as his chances for a fair trial anywhere on this Globe - are destroyed by well-orchestrated pre-trial publicity.

Any mentioning that he is presumed innocent until and UNLESS found guilty by a fair jury of his peers meet with violent personal attacks from local people considering that the family and friends mourning the person who ALLEGEDLY died in a fire have a right to mourn by presuming guilt of whoever the police publicly points their collective fingers at.

My next blog is going to be dedicated to the bigger timeline of events in that same area, well documented,

But, this blog I want to dedicate entirely to the value of reputation.

Those in power have valued their reputation from the time immemorial - above all else.

Innumerable people were tortured and executed in horrible ways because they dared to criticize authority - religious or secular.

Criticism of those in power was deemed, for millenia and centuries, heresy, treason, "seditious libel".

People who dared to do that, against all odds, were cast out of societies, cast out of churches (anathemized), and declared outlaws, which meant in earlier times that anybody had a right to kill them (or rob them of what they have) with impunity.


If you think that times have changed, democratic societies embedded freedom of speech, including and especially permission for members of those society to criticize their government officials, into their Constitutions and strictly enforce this principles, think again.

Let's take my favorite state of New York, the United States of America.

Every public official there, state and local, executive, legislative or judicial, is sworn to uphold and protect the U.S. Constitution and the New York State Constitution.

Both of these Constitutions contain guarantees of freedom of speech - and that includes, by implication, freedom of criticizing the government.

But, let's look how information criticizing the government, especially the people who can wreak the most havoc in people's lives - judges, prosecutors and the police - is made available to the people.

confirmed in a court case that the public does not have a right of access to evidence of police misconduct on Freedom of Information Requests, citing a state law.

That the state law she has cited is blatantly unconstitutional, being invented specifically to impair cross-examination/impeachment of police officers by criminal defense attorneys, and thus state law was meant to undermine federal constitutional confrontation rights under the 6th Amendment - did not bother Janet DiFiore, a former prosecutor, one bit.

So, as it is now, in New York, evidence of police misconduct is secret.

Because it is important for the government to keep their dirty secrets away from people.

And, even when such dirty secrets spill over into lawsuits when those same police officers, let's say, beat some women or try to run them down with cars - those cases are quickly shooed away, by settlements, or by corrupt judges like Otsego County Judge John F. Lambert who first


So, Judge John Lambert, the former prosecutor, made the lawsuit against Bowie to go away, and Bowie, while being quietly fired by the Delaware County Sheriff's department in 2016, 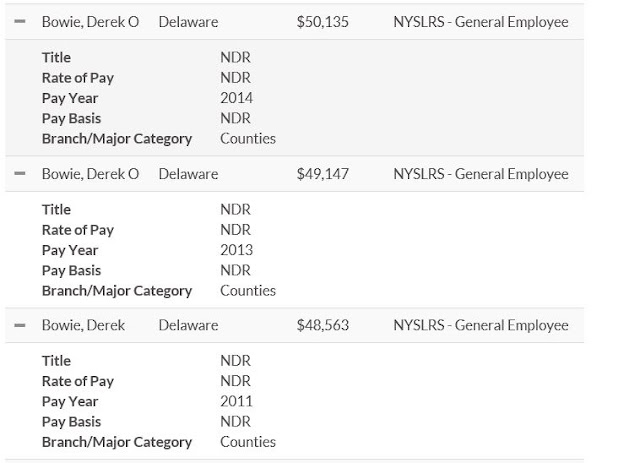 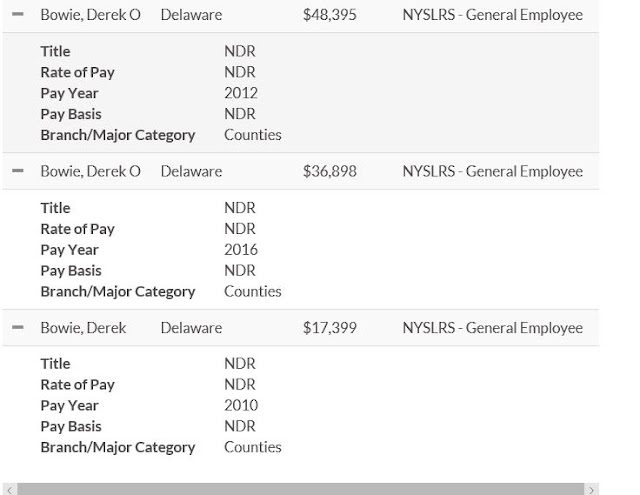 and despite two lawsuits of two look-alike women who he assaulted, see also here, 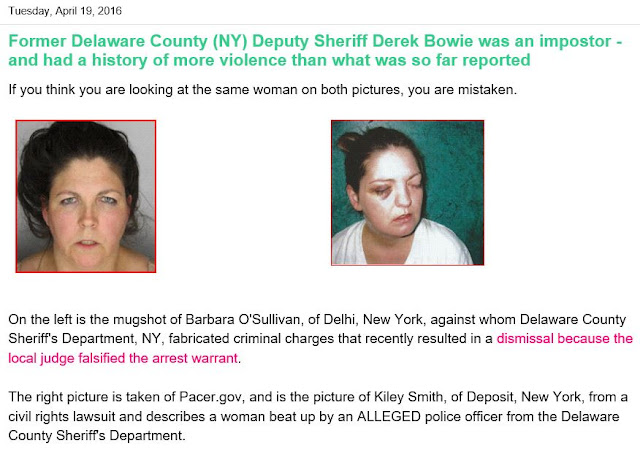 is employed as a valuable police officer some place else now. 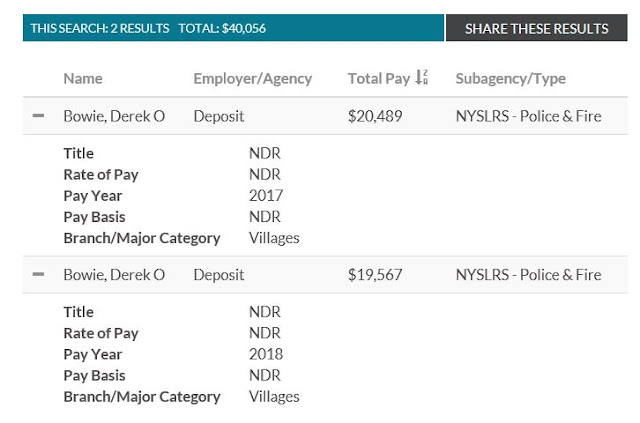 So, thank you, Judge John F. Lambert, for helping the police keeping a violent predator on the police force, since he escaped unscathed, he will next time not just beat women up, break their ribs, traser them, put fire to their houses, taser their dogs and assault them with police vehicles, but kill them outright - with such massive support, at public expense, that has already allowed him to escape accountability, he can do nothing less to oblige impress his benefactors.

But, you will never be able to obtain evidence of misconduct of Derek Bowie through a Freedom of Information Law.

Only on Pacer.gov, materials of deposition.

Only in Delaware County Supreme Court (if they did not block the public from those materials, hide them and then destroy court materials of this case, as this particular court has a history of doing, at judges' request), when he was sued by Barbara O'Sullivan who he assaulted.

The same with judges - you won't ever have access to complaints against them, no matter how supported by verifiable documentation.

The same with prosecutors.

Yet, for judges and prosecutors, judges invented for themselves "absolute judicial/prosecutorial immunity for malicious and corrupt conduct" (!), so those lawsuits, without review on the merits, are tossed directly into the garbage bin.

So, there is, on the one hand, freedom of speech protected by the federal and state Constitutions.

On the other hand, the government, aware of the fact that reputation may be destroyed by saying several words about the person publicly - which can never be "unsaid" - devised ways to:

At the same time, the government:


Which brings me back to the issue of the value of reputation.

So, let's get it straight.

There is a constitutional guarantee of the freedom of speech, and criticism of the government - on the one hand.

Yet, when reputation of a member of the public is involved (and, let's not forget that it is the members of the public that are also members of a public sovereign, employers of the government, and those who are, in their position of power, by the U.S. and State Constitutions, higher than the government, and not the other way around), a completely different thing happens.

And the public's "right to know" will be satisfied all right during and after that trial, not before?

Don't those same police officers, prosecutors and judges HIDE complaints of their own misconduct from the public - because they know, once a word besmirching a person's reputation gets out on the World Wide Web, the damage to the person's reputation cannot be undone?

So, if the "right to an open public trial" is turned by the government on its head and is turned to besmirching the accused's reputation BEFORE that public trial, and into destroying his presumption of innocence and his chance to get that open FAIR trial from an UNTAINTED jury pool - what is the remedy?

Shouldn't we at least equalize the reputational damage visited upon people accused of criminal conduct - whether they are members of the government or not?

Shouldn't we put down the secrecy/privacy walls of

proceedings - just as police and prosecutors splurge the information about the accused long before that open public trial, so that any potential jurors who would be picked for the trial, would come well brainwashed by prosecutors?

And, shouldn't the police and prosecutors PROHIBITED, BY LAW, strictly enforceable by grand juries operated only by the public, without any input from prosecutors, to publicize charges, evidence and identity of the accused in the media, newspapers, Internet, press-conferences, to make sure than, when that OPEN PUBLIC TRIAL comes, the jury gets that evidence FOR THE FIRST TIME, not after it was discussed and speculated about by the media and people in the area for months before that trial even began?

As to the interesting timeline of events not included into police press-release on the Terrence Truitt's case, but that may be relevant to the case, my next article.

When people are corrupt and drunk with power, they do not hide their ends very well.

So, as to the interesting ends in People v Terrence Truitt that the local media is afraid to cover -

Stay tuned.
Posted by Tatiana Neroni at 11:08 AM