More on presumption of innocence, public knowledge of the law and quality of legal representation - now in New Jersey. #TheDogBiteLawyerDavidJCowheyIsABigotAndMisogynist

I wrote on this blog, many times, unfortunately, about the American public's rejection of the concept of presumption of innocence, and about personal attacks on those who point out that filing of criminal charges/indictments is not evidence of guilt.

I wrote how about the anti-Russian bigotry, too, about vicious attacks on me personally because I happened to invoke constitutional rights of criminal defendants in the United States: 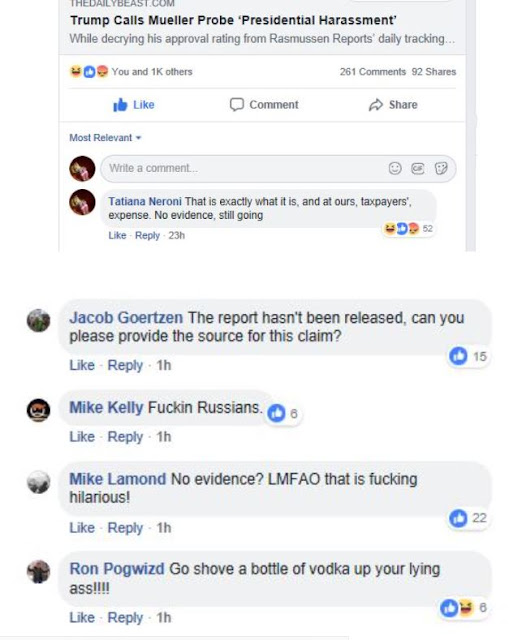 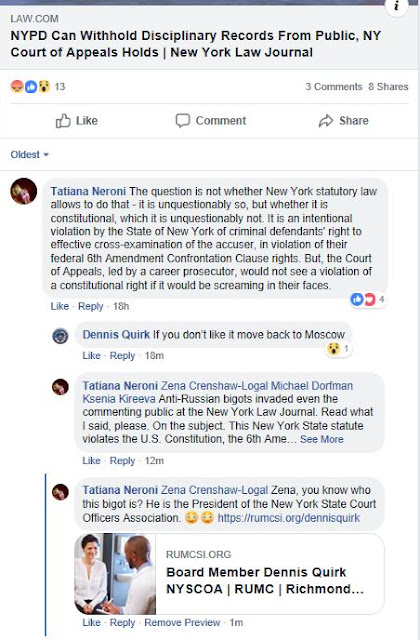 It is, of late, impermissible to be a Russian (even an American citizen, like I am) in America - and dare to express an opinion, being Russian.

And, here are yet two other examples.

No, when you are a massage salon owner, 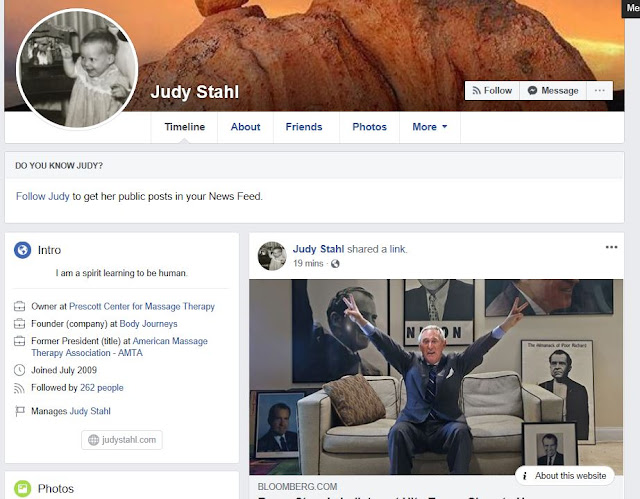 and you put a "haha" on a presumption of innocence comment,

it may be understandable.

Not all massage therapy salon owners may know about presumption of innocence, especially those who have enough time to surf Facebook during a business day - meaning, not good even in arranging a good busy massage business, right? 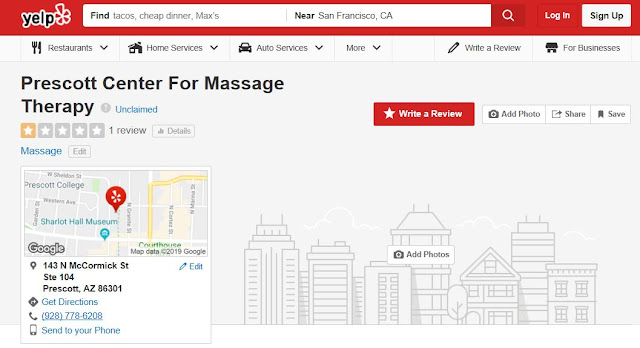 But, when you are a lawyer, and a lawyer of 35 years, you are expected to have those interesting things called "attorney ethics" that would prevent you from calling females in general, and females you don't know even more - "commie hogs".

Not to mention - a minimal degree of competence that would prevent you to call people names for mentioning presumption of innocence of an accused in a criminal proceeding.

The next guy, of course, blocked me on Facebook after I pointed out the incompetence, bigotry and cowardice of his statement, but not before I saved the scan and then looked him up, see information about him below.

If a lawyer does not know what presumption of innocence is, that indictments and arrests are not evidence of guilt, and is triggered by mentioning these simple constitutional maxims to the point of insulting the unknown woman who happened to point them out as a "commie hog" - that says a lot about the quality of legal representation in the United States, doesn't it. 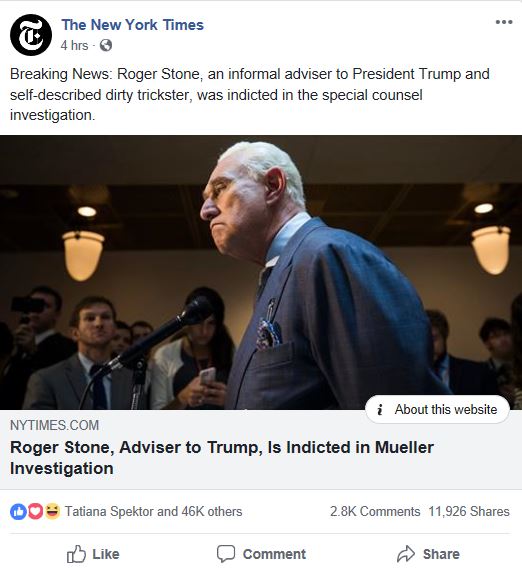 Here is my post and the reply of one David J. Cowhey: 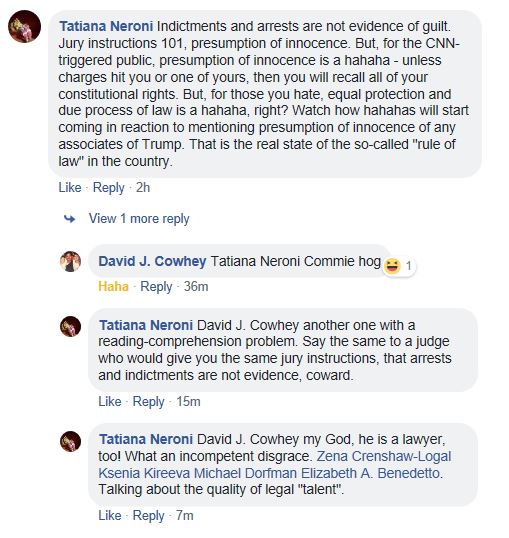 See that I tagged the guy, but the tag went black from blue-interlinked, meaning that the guy has blocked me.

And here is evidence that he is an actual lawyer. 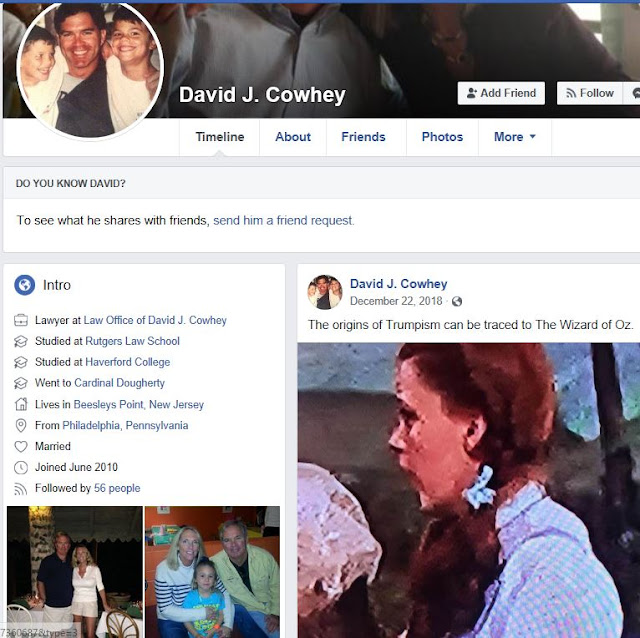 Not only David J. Cowhey - the one who reacts to the mentioning of presumption of innocence of a criminal defendant and of the contents of standard court instructions to the criminal jury that criminal charges (indictments) and arrests may not be considered as evidence of crimes - an attorney.

He is an attorney practicing for 35 YEARS!!!!  - according to public information on the New Jersey Court's website.

Here is how he advertises his services: 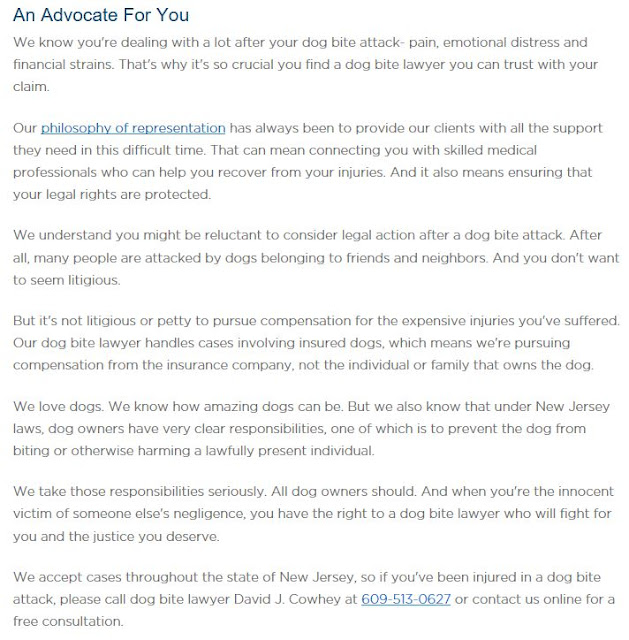 I understand that, possibly, for a "dog bite lawyer" - even one practicing for 35 years, it is not necessary to know such petty stuff as presumption of innocence and that criminal charges and arrests do not constitute evidence of a crime in a criminal proceeding - even though the law license that this attorney, David J. Cowhey, sports for 35 years, is broad and allows him to practice, among other things, criminal defense law - so, potential customers, beware of the competence.

As well as potential defense attorneys and judges in a criminal case, if this guy, God forbid, gets on a criminal jury.

Attorney David J. Cowhey is not only a "dog bite" lawyer. 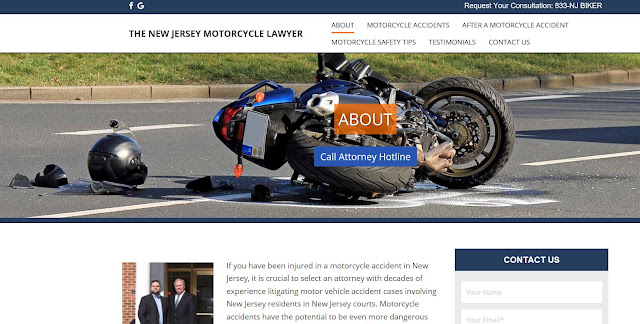 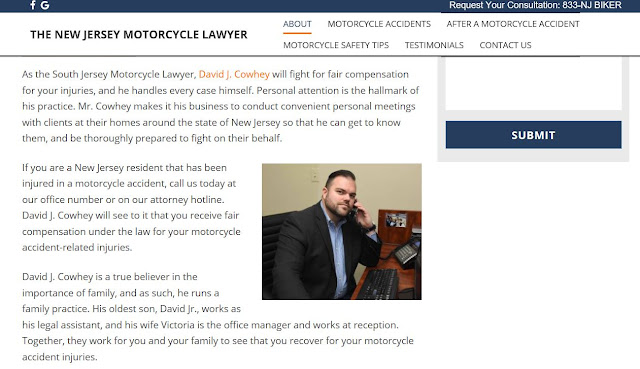 Why is he placing his legal assistant son on his picture as if he is part of a legal team though - I do not know.

And, why he does not put "attorney advertising" on his website describing his skills - as required by ethical rules - I do not know either.

But, what I do know is that successful longtime attorneys do not have time to, in the middle of a working day, surf Facebook and insult female strangers on social media for mentioning presumption of innocence as "commie hogs".

Posted by Tatiana Neroni at 8:38 AM