Usually, public officials in Delaware County (New York) sit tight in their positions (appointed or elected) and nothing can upend them.

After all, they are paid, with benefits, whether they are doing their job or not, and they are employing vast clans of relatives and friends to support, so there is a "moral obligation" to those clans to keep on going.

Yet, recently, as I wrote before, there was a tide of "retirements" from appointed and elected public officials in Delaware County - which curiously coincided with:


As a result of a settlement in a lawsuit, in December of 2015 the very Democratic Governor of the State of New York Andrew Cuomo announced that prisoners in New York State prisons will no longer be "treated" to what amounts to a punishment through starvation - the so-called "loaf".

Apparently, Delaware County jail practiced starvation of its prisoners, and that same starvation as punishment continued further - as evidenced by a pro se lawsuit filed in January of 2017 against the Delaware County. 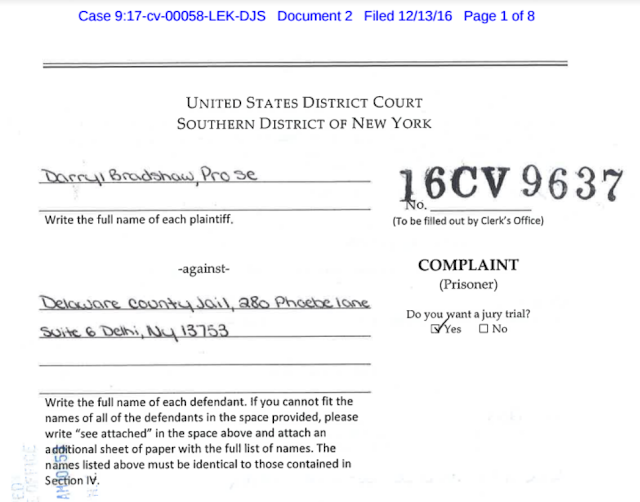 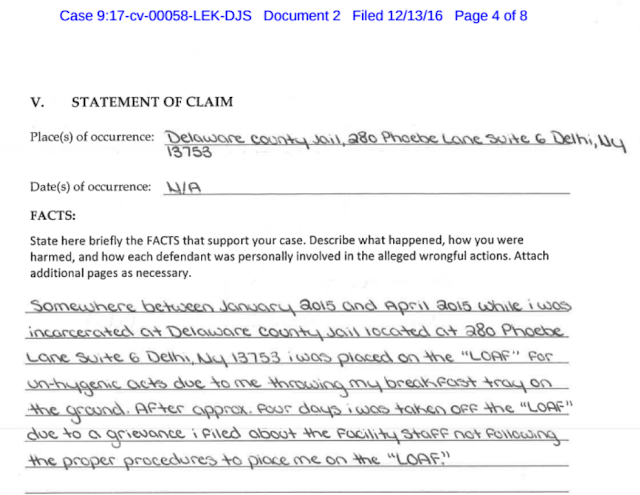 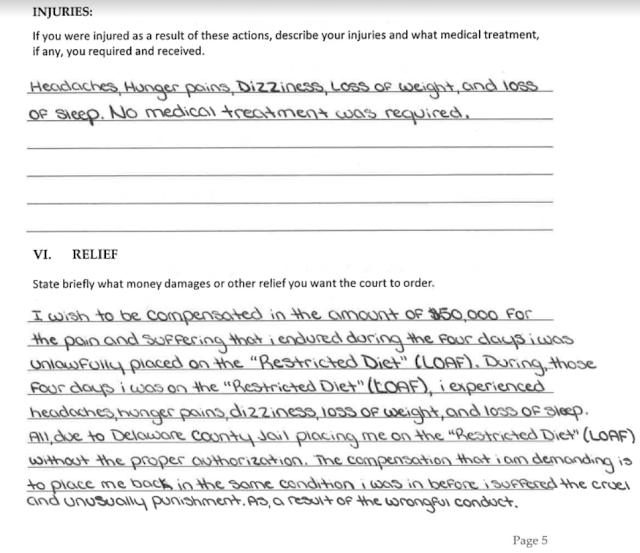 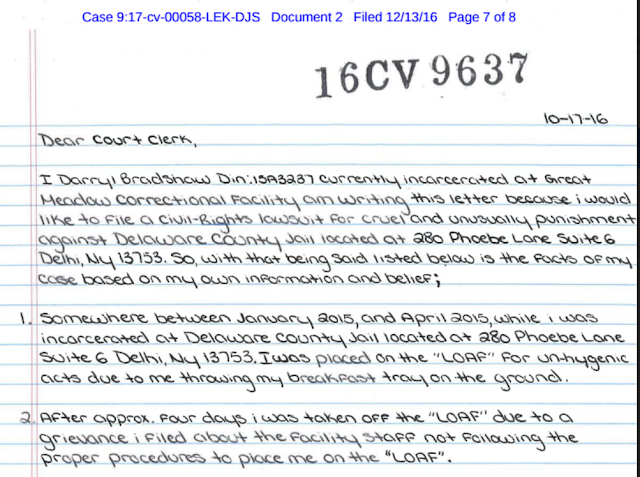 While the lawsuit was dismissed, it was dismissed without prejudice, and can be renewed, especially that Darryl Bradshaw's conviction was reversed and vacated and he was released from state prison.

Since Mr. Bradshaw filed his lawsuit from state prison, it is apparent that he was not serving time in Delaware County Jail, but was held there as a pre-trial detainee.

His lawsuit also mentions that he filed multiple grievances against Delaware County jail, raising the issue whether he was starved in retaliation for those grievances.

So, whether the lawsuit is or is not renewed, Thomas Mills' Department was exposed for starving pre-trial detainees.

Mills' Department was also earlier exposed, in a lawsuit that ended up with a settlement on the eve of trial, for hiring police officers outside of Delaware County (a jurisdictional violation arguably rendering all their arrests legally void), with local kinship and connections to high-ranking employees in Delaware County government substituting for education, training and character fitness.

Yet another lawsuit against the Delaware County, currently pending, alleges that the Delaware County investigators from Social Services and Sheriff's Departments fabricated a false criminal charge of felony child sexual abuse (a deportable offense) against a Hispanic legal immigrant. which can promise Delaware County taxpayers a hell of a lot of damages to have to pay out, whether the case goes to trial or is settled.

Of course, the Delaware County has filed a motion to dismiss that lawsuit "for failure to state a claim", which is currently pending, but it appears that there is enough in the complaint to survive that motion.

Also, it has been announced in the press back in January of 2017 that the FBI is investigating the former Commissioner of Social Services William Moon - and, consequently, the Delaware County Department of Social Services.

This particular lawsuit alleges, in sum, that

Since the uncle is a Hispanic LEGAL immigrant, and the fabricated charges were for a D felony, a deportable offense and a heinous crime that, on conviction, would have required a lifetime registration and loss of multiple civil rights, and being branded as a child molester - which also presented a risk to the plaintiff's life - the lawsuit is pretty bad, and has implications of racism, same as removal of a protestor from the County Fair grounds where the County police was present, on County time, as paid private security officers.

Of course, if the case ever gets to trial, this plaintiff can also use against Delaware County all the documents from the previous lawsuit against Derek Bowie, the Delaware County's "Deputy Sheriff" who was hired simply because his uncle was a longtime investigator for the Delaware County District Attorney, and was not fired until he assaulted, as alleged in respective lawsuits, not just one, but TWO women, and those women, interestingly, looked alike - until the lawsuit by one of the women went to trial (and forced the county to settle right before trial for an undisclosed amount).

Upon information and belief, Bowie was fired from the Delaware County Sheriff's Department, but was readily picked up by the Davenport Police Department, so now people in Davenport need to be aware - and afraid - of a potentially volatile and murderous cop in their midst, see his salary before he was fired in 2016: 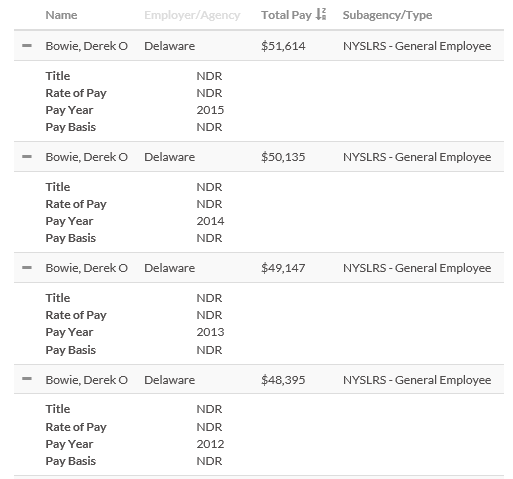 and after he was fired mid-2016 and picked up by the Deposit Police force, losing more than 2 times in salary as compared to $51,614 that he's got in his last full year of unlawful employment with the Delaware County: 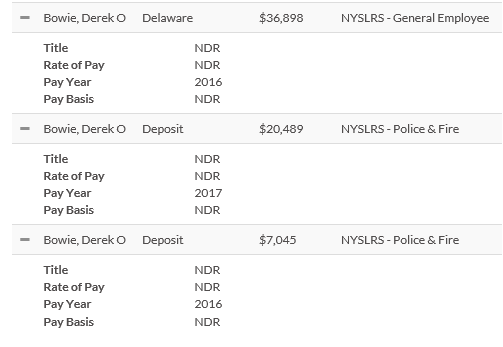 What tipped the plate of Sheriff Mills to remove himself from his elected position: 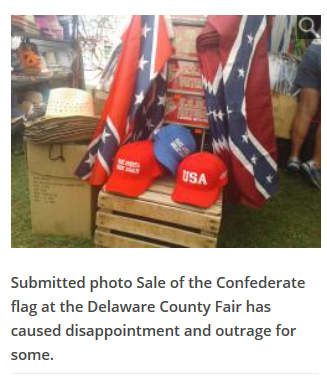 we will, probably, never know.

But, something triggered his resignation, as elected public officials do not SUDDENLY decide to retire, before the end of their terms, unless there is a SUDDEN reason for that.

And there are plenty of reasons for Thomas Mills not to honorable retire, but to be dishonorably impeached and sued for all the misdeeds he allowed his employees to commit under his watch.

Of course, Mills, as well as local government officials - and Mills' friends and supporters - tried to present it as an honorable retirement after a long "public service". 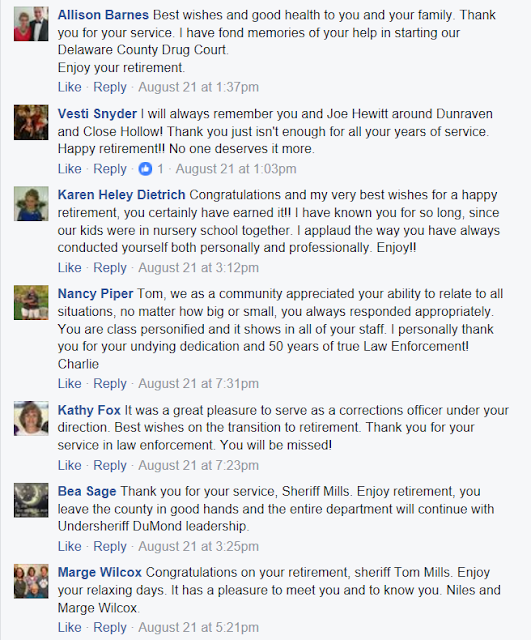 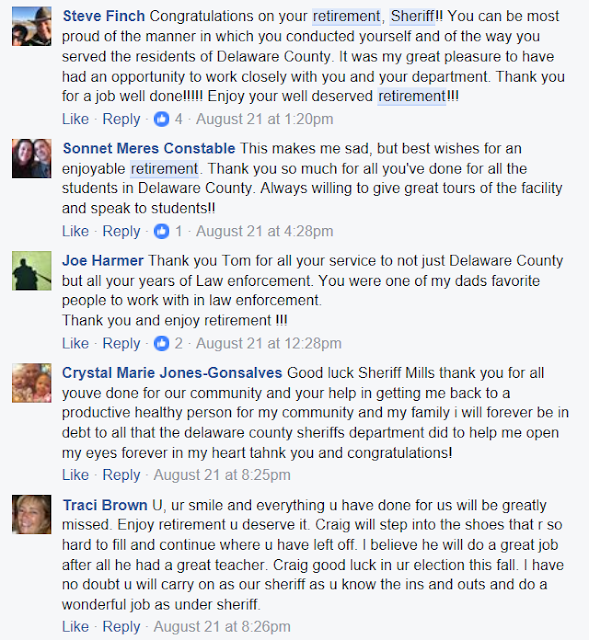 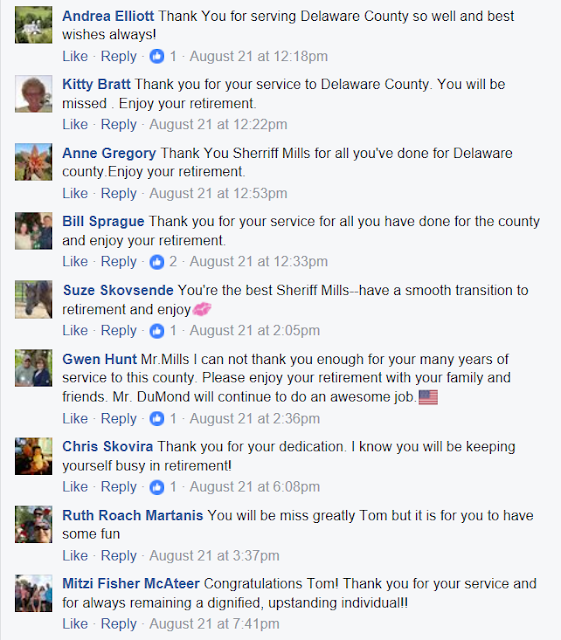 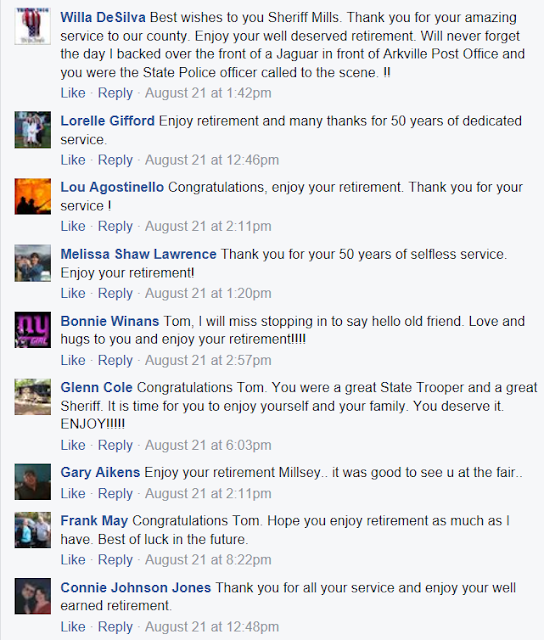 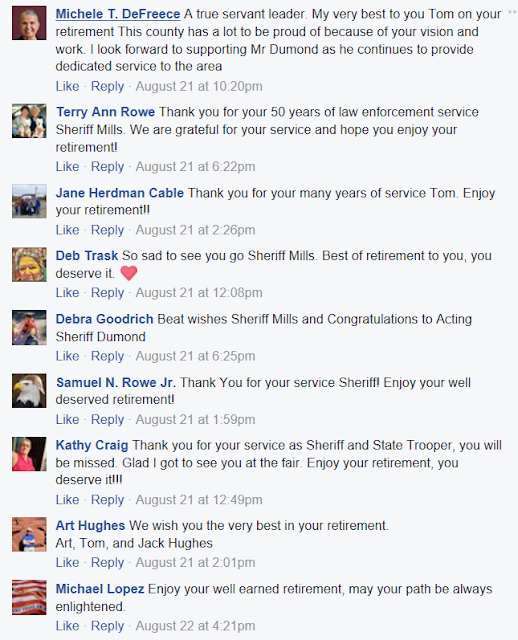 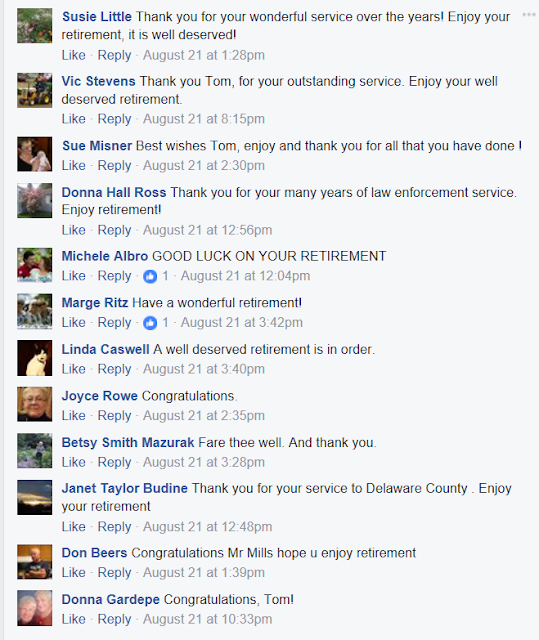 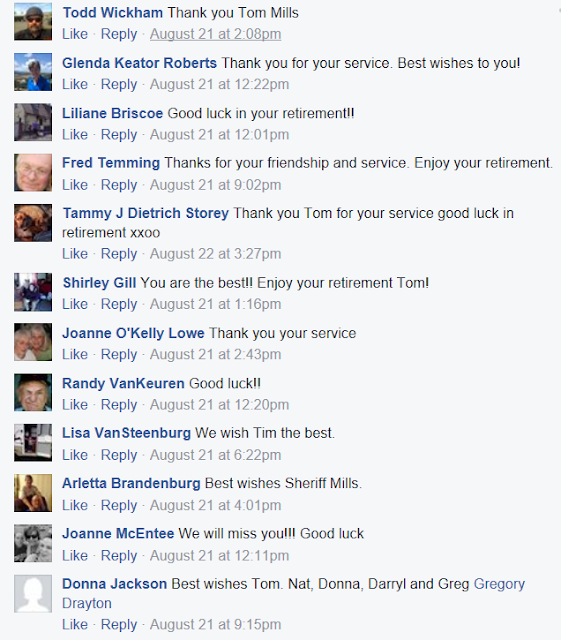 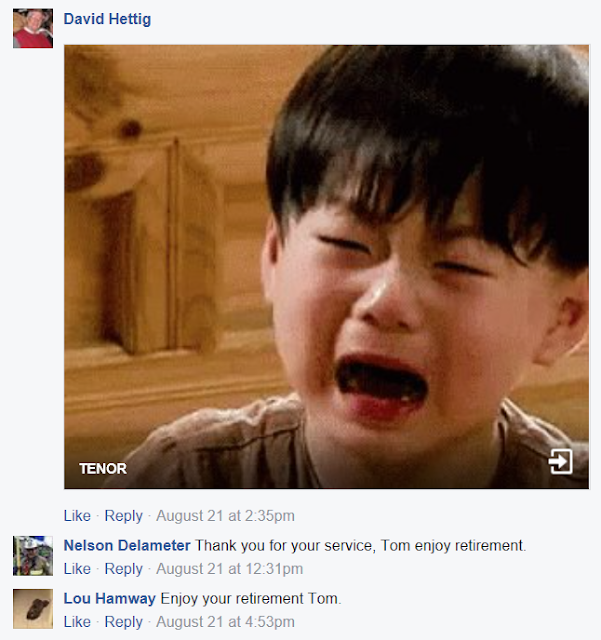 But, the less "public servants" like Thomas Mills we will have, who, among other things:

Because Mills recalls the existence of the U.S. Constitution only when he needs to be re-elected, 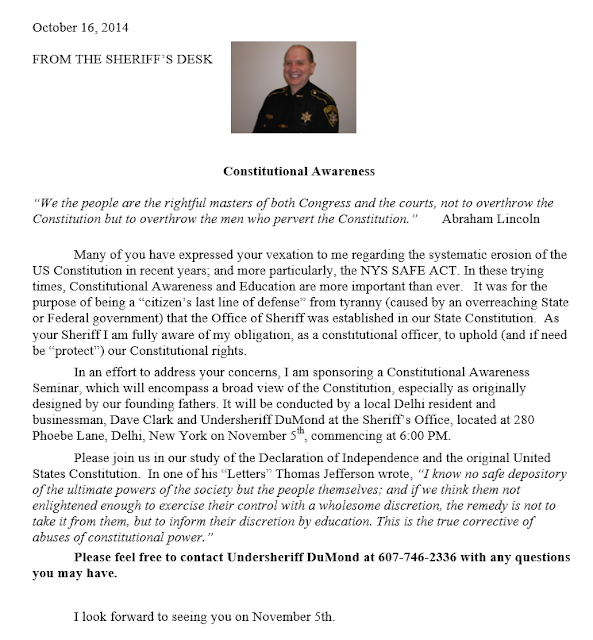 otherwise he feels free to trample it, as long as it suits him and the clans of employees that he employs.


As to the glorious replacement of Sheriff Mills - The Acting County Sheriff Craig DuMond, a "shining star" of integrity and competence, I will run a separate blog.