I wrote an article yesterday about the supposedly respectable "mainstream" "expert" source, The Economist censuring out (as "spam", no less) on-point polite and reasoned comments to its articles posted on Facebook by deleting comments that do not fit its obvious political agenda - to pin violence in Charlottesville, VA not on those people who committed violence, or failed to protect the public from that violence, but President Trump.

In that blog article, I pointed out the two U.S. Supreme Court precedents that legitimized (at the judges' "discretion" - meaning, that the judges willingly accepted those cases out of the absolute majority of case that they rejected, and ruled in favor of the Nazis and the racists, bending the law):

My bad was that, in a comment to an article about a white supremacist who participated in a court-approved rally fired from his job, I asked a question - is it legitimate for an employer to fire an employee for his off-hours political expression. 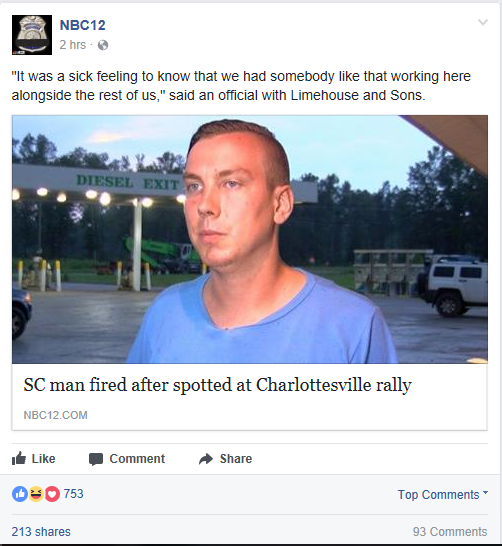 Here is the thread that followed, where I was called (for asking that question):

So, in answer to that question, I've got this torrent: 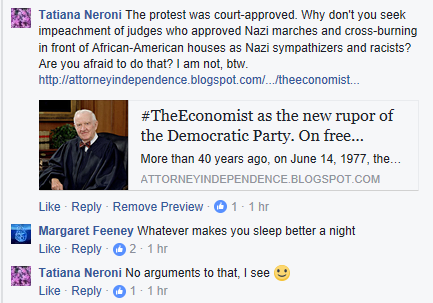 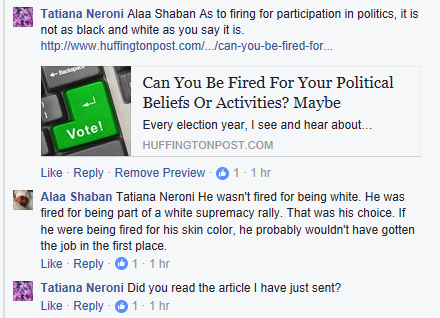 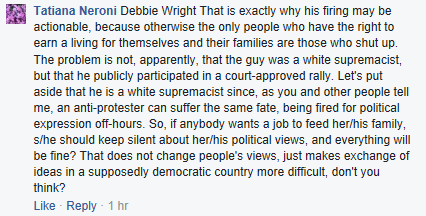 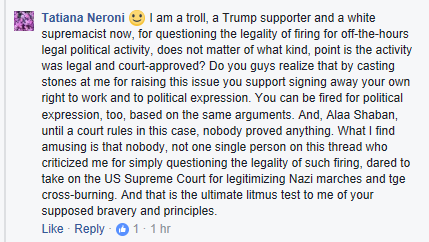 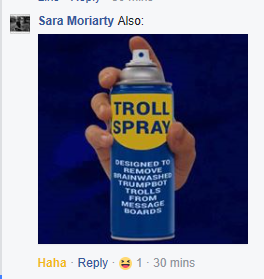 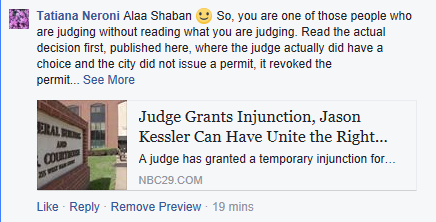 And, after I posted the links to the US Supreme Court precedents allowing Nazi marches and cross-burning, and asking people, why they attack me for asking a legal question instead of protesting court decisions legitimizing racism and hatred, NBC12 started to block practically all my comments, even those answering what was really spam, like this exchange:

My question asking #RebeccaJamarillo to answer to the question I actually asked in my comment, was marked and deleted as spam:

The next comment marked as spam was - no, not this one, accusing me out of the blue of supporting a rapist or rape:

No, NBC12 shut me down and prevented me from ANSWERING the abusive comment, after the author did not like that I put a laughing emoji on that comment:

The next comment that NBC12 marked as spam was actually agreeing with a commentator who supported my question: 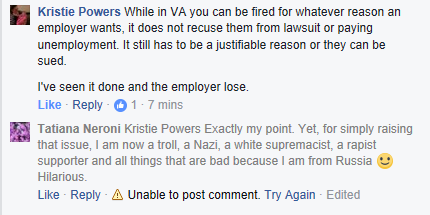 The next "spam" comment was my announcement that I am leaving the thread because NBC12 is deleting references to U.S. Supreme Court precedents - which was true.

So, it is clear that for #NBC12, same as for #TheEconomis, "spam" is an attempt at reasoned discussion of legal issues involved, and personal attacks on people who try to maintain that discussion is legit and proper.

The same attitude was demonstrated by NBC12 when it did not delete as spam personal attacks and threats directed at a woman who commented (in agreement with my critics' logic, by the way), that on the same grounds ("at will" no-reasons-stated firing) any employer can also fire anybody else, including a BLM member, here is part of that thread: 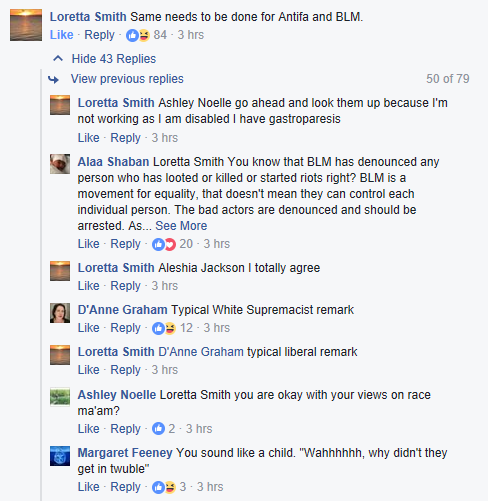 What can I say?

In my country, the United States of America, apparently, you can only have a job if you conceal your legally held political views and not express them publicly.

Because, had that guy kept his mouth shut and had he not gone to that rally (while continuing to hold white supremacist views anyway), he would still have had that job.

What is sad is that a supposedly honest media source stifles honest discussion of legal issues involved, and stifles revealing as to who exactly is responsible for legitimizing racial and anti-Semitic hatred - while allowing personal attacks on those whose only "fault" is that they squarely ask questions pertaining to ALL OF US.

Because Loretta Smith, a disabled individual who was threatened to be reported to her employer in order to have her fired, too, FOR ASKING A QUESTION, no less, asked the same question, in essence, that I was asking - will it be ok when members of BLM (or an environmental group, or freedom-of-speech group) be fired because of what they do, or views they express during their personal time and in their personal capacity, off-hours?

If that is true, there is no democracy in this country.

Remember what they said about me?  I am from Russia - or, rather, USSR - I know how people, for fear of their jobs, remained silent for a long time.  And what came out of that silence.

Is that what people really want by adamantly support firing for off-hours political expression and by attacking anybody who dares to ask questions about legitimacy of that firing?

As to NBC12, same as The Economist, the media source has failed the litmus test.

It has sure lost credibility this way, and cannot now say that comments on its page are reflective of public opinion.

But, when public opinion polls are skewed this way, don't be surprised when elections, economic and social trends do not go the way those polls "predicted".