Judicial discipline in New York in 2015 - Part II . Drug-addicted sons of judges with tied kittens and lighters and their honorable parents

I continue to review judicial discipline in New York in 2015, as per the annual report of New York Commission for Judicial Conduct.

In my previous blog, I provided a table with a brief description of judicial discipline imposed by the Commission in 2015.

I would like to concentrate today on two cases where judges were involved in criminal behavior, but remained on the bench.

1) the theft of the court funds case;
2) the kitten case.

In the theft of the court funds case, a judge, Thomas Kressly (Urbana Town Court, Steuben County) took $500 in bail money from the defendant's family, and the money disappeared.

Judge Kressly did not provide a coherent explanation of the missing money, so Judge Kressly had to be charged with theft.

Judge Kressly was not charged with theft and remains on the bench.  First, it is a problem to keep on the bench a person who was caught in a theft before, for veracity reasons, and because a person who most likely committed a crime does not have the requisite character to be a judge.

Yet, Judge Kressly, who is not an attorney, remains on the bench.

This case is a disgrace, and I do not mean to rhyme.

Judge Daniel P. Sullivan and his wife, according to the judge's own admission, spent all their life savings to cure their son of drug addiction.

Apparently, it did not work, because the son was caught by the police in the stall of a women's restroom of a parking lot of a public park after closing hours of the park, with "hog-tied" kittens and a lighter. 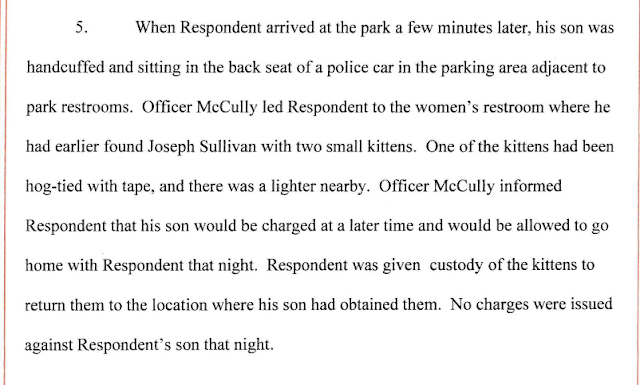 So, Judge Sullivan was called to the scene to take his son home, so his son was already spared immediate charges, immediate arraignment and jailing - even though he was caught practically red-handed in the commission of a two violent felonies (cruelty to animals and arson).

Why was Judge Sullivan's son not immediately charged with a felony, arraigned and put in jail pending prosecution?

Because he was a judge's son?

The next question is - why kittens were given "into the custody" of a defendant's son, who was taking kittens AND defendants someplace from the scene of the crime.

Wasn't it the duty of the police to take the kittens to the nearest shelter?

Why give EVIDENCE, not to mention, live creatures, to the father of a criminal defendant just caught in the commission, once again, of two violent felonies?

That's quite a chain of custody for the evidence.

-  Where did you put the evidence of the crime, officer?

-  I gave it to defendant's father?

And, my question is - where are the kittens now?

Had they gone to a pound, there would be records as to what happened to them.

Since they went into the hands of the sadist's father covered with the shield of "honor" that puts him - and his son - above the law, where are the animals?  What happened to them?

Did Judge Sullivan throw them away "where his son found them", hog-tied by his son as they were?

Did Judge Sullivan give the kittens to his sadistic monster son - as a favorite toy - to finish what the son started?

Judging by the fact that Judge Sullivan had the audacity of calling the police and asking them not to charge his sonny boy with anything because he still believed his son was a good Sheriff's Department material, says it all.  Judge Sullivan's "fatherly love" makes him blind to the monster he continued to raise, so anything is possible.

Now, Judge Sullivan, as a judge of a justice court, knew that what his son did was at least one violent felony (attempt at committing an act of cruelty to animals with severe injuries).  How would he know that?  Judges of justice courts handle arraignments and preliminary hearings in felony proceedings in New York.

So, Judge Sullivan, after he did whatever he did to the kittens given by the police into his "custody" at the crime scene, started to interfere with the court the very next morning, in the following way: 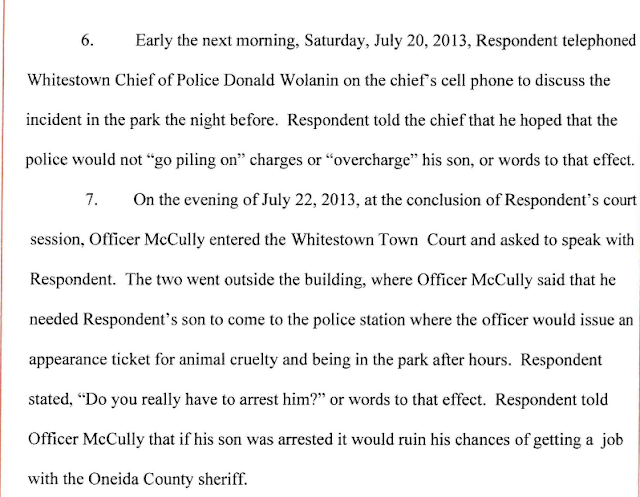 What the judge did qualified as obstruction of justice at the very minimum.

Was judge Sullivan charged with any crime for what he was doing?  No.

He was slapped on the wrist and allowed to remain on the bench.

And think about it - the judge was concerned that a charge of animal cruelty, after being caught red-handed, will ruin his son's chances of getting a job with the Oneida County Sheriff!

Given that mental health and employment records of police officers in New York are protected from disclosure by Civil Rights Law 50-a, and based on the judge's sadist son's case - how many more uncured drug addicts and sadists are walking and driving the streets in police uniforms, with tasers and guns?

Here's what happened to the judge's sadist drug-addicted son: 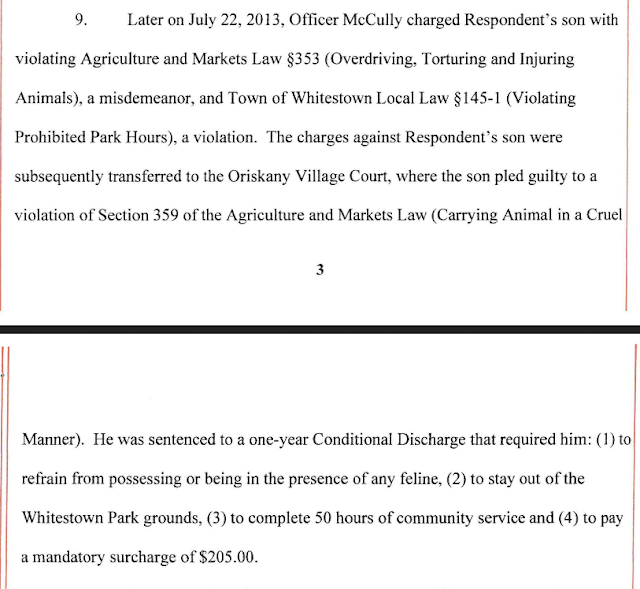 The sadist was charged with a misdemeanor instead of a felony.

Even with that low and inadequate charge, he was allowed to plead to a lesser misdemeanor of "carrying an animal in a cruel manner", which obscured the nature of the charge.

Even under the charge the son-of-a-judge pled to, he could be sent to jail for at least some time.

That did not happen.

He could be and should have been sent to a rehab again.

Because the court was sentencing a son of a colleague, a fellow judge?

50 hours of community service, stay away from the park, have your father pay a fine and a surcharge and - now this is a real punishment - stay away from cats!

You can other small and helpless critters to your heart's desire, but stay away from cats only.

To escape a conviction for a violent felony, for an act of sadism to animals with a conditional discharge, a fine and surcharge, 50 hours of community service and a prohibition to come into a certain park and near cats?

And, this young man might still hope, as his father does despite everything that happened, to join the police force?

We really need to fight for the repeal of Civil Rights Law 50-a.

Imagine how many sadists and perverts with a badge are hiding behind this law.

As to Judge Sullivan, his son and the kittens.

Judge Sullivan is still on the bench.

His son escaped with a slap on the wrist.

And the kittens - where are they after they were put into the "custody" of the sadist's father?

And - as an afterthought...  While everybody coddles a sadistic brat because he is a son of a judge, we need to remember that homicidal maniacs started their "journeys" into killing sprees by first exercising on animals.