A couple of days ago I ran a blog post on the sidewalk video footage of statements from people who were not allowed to testify at the secret public hearings of the New York State Statewide Commission for Attorney discipline.

It was a sidewalk footage because the Commission's representative, contrary to the requirements of the Open Meetings Law (to expect from a bunch of high-ranking lawyers to abide by the law is too much to expect, I guess), asked the reporter to leave not only the room, he did not even get there, but even the building where the "public" hearing was scheduled to be held, and to disappear even from the sidewalk.

Good for the reporter that he did not disappear from the sidewalk and instead suggested that the Commission can try to call the police to remove him - which, of course, did not happen.  High-ranking attorneys know the law they are breaking and know when they are breaking too much, when their breaking the law is against people who have no recourse and when they are asking for a civil rights lawsuit for a 1st Amendment violation, with money damages.

I already covered a lot of statements made in that video footage.

One statement that I did not cover keeps coming back to me, and I decided to run a separate blog post on it.

A lady, an attorney's wife, was speaking about her divorce proceedings (from that attorney) that is lasting for 6 years where the court does not seem to see evidence of her husband's income (for purposes of equitable distribution), while the husband is an attorney practicing in New York State Supreme Court and his cases generating income (that should be joint income for both of them, to be distributed) documented in the E-track system of New York courts.

Many readers who are not married to attorneys were writing and calling me, as a feedback to my blogs about intellectual dishonesty of judges (with documentary evidence), to complain that certain evidence submitted by them to courts was either not taken into account or misrepresented by the courts.

One judge featured in the interlinked blog already retired from the bench 3.5 years before his term (looks like running to me) and the other is still on the bench but is defending against a 2nd lawsuit by a female court employee for discrimination and retaliation, so maybe the NYS Commission will finally take its head from where it is and make sure he leaves the bench or is taken off the bench (the second one a more preferable scenario, to be fair to Judge Tormey's victims).

Here is the list from Pacer.gov of all lawsuits against Judge James C. Tormey, by the way - most are "closed", dismissed based on the concept of "absolute judicial immunity" which should not preclude a disciplinary investigation - but in New York State, nothing is done to a judge if the judge is high enough and has good enough connections. 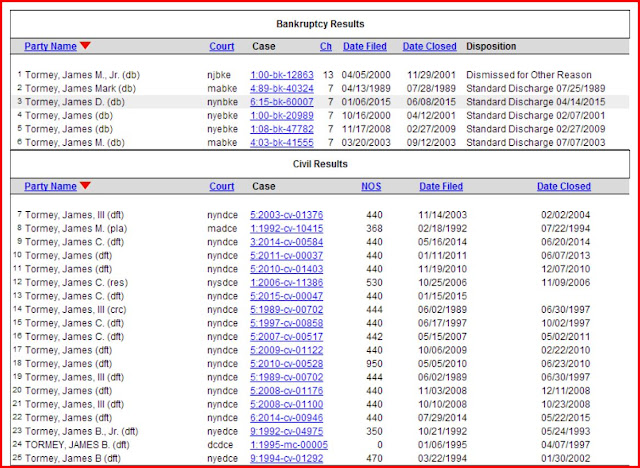 In the remaining pending lawsuit by Nancy Rodriguez Walker against Judge Tormey, where you, my dear New Yorkers, are footing the bill for legal defense of Judge Tormey against claims of intentional misconduct in office and where Judge Tormey is represented, instead of prosecuted, by the New York State Attorney General's office at your expense, and where the plaintiff conspicously is represented by attorneys outside of the area of Judge Tormey's administrative reach (Tormey is the Chief Administrative Judge of the 5th Judicial District), Judge Tormey's motion to dismiss "for failure to state a claim" is pending.  At the taxpayers' expense, remember.  Since the presiding judge is the "closer" Lawrence Kahn, and since courts habitually extend judicial immunity far beyond its breaking point, I will hold my breath on that.

I also note that one of the attorneys representing the plaintiff left during the pendence of the motion.  I wonder whether any intimidation behind the scenes was taking place, like it was taking place with me when I was litigating federal lawsuits against judges.

Judge Tormey is a master when invisible evidence is concerned.  He managed not to notice an entire court proceeding reflected in the court's record when ruling in a case based on comparison of two lawsuits - between the two of them, Judge Tormey saw only one, and adamantly refused to correct his obvious mistakes.

Such things happened to me also, on a systematic basis, with the following slant:

Do I recognize that the problem exists?  I do.

Does the system recognize that such a problem of the so-called institutional judicial bias to "their own" and against "their own" exists?

Not that I heard of, not in court decisions and not in "findings" of any Commissions.

What should be done about it?  A reform of the court system which WILL NOT happen through any "statewide commissions" and will not happen even through the Legislature, because the Legislature is run by elite lawyers who benefit from the "hidden evidence" and slanted rulings of judges.  They will not allow through any laws that will hurt them.

(I was punished by Chief Judge Gary Sharpe of the U.S. District Court for the Northern District of New York for quoting to him the law stating that the People and not the government is the sovereign in the U.S. and in New York, the appellate court affirmed the sanction) -

and we need to act like we are sovereigns and bad judges are bad servants subject to booting and replacement, and make sure that efficient laws efficiently enforced are in place to make that happen.

Posted by Tatiana Neroni at 6:20 AM