On 9/24/2012 a group of lawyers filed a class action on behalf of several named plaintiffs as class representatives in the U.S. District Court in the Central District of California.

The case was about defects of a all-electrical vehicle, NISSAN LEAF.

Appointment of a son to a court from which appeals go to the father was completely inappropriate, even though the father was by that time relegated to the "Senior" status.  He still was a judge deciding appellate cases from his son's court, which created a huge appearance of imporpriety.

Yet, at the point of assignment Judge Dean D. Pregerson did not recuse himself, nor did he make any disclosures about his father as the judge of the court to which possible appeals will go.

The name of the objector was Alex Kozinski, the then Chief Judge of the U.S. Court of Appeals for the 9th Circuit, a judge who was working with Judge Pregerson's father as his colleague, by the filing time of the lawsuit, for 27 years, and as his superior - for 5 years.

(1) appellate authority to reverse Judge Dean D. Pregerson's cases (not necessarily his own) and thus create a bad record of reversals for the judge;
(2) disciplinary authority.

In his "objections" filed on 10/15/2013 Alex Kozinski and his wife, attorney Marcy Tiffany, made the following frivolous and sanctionable statements: 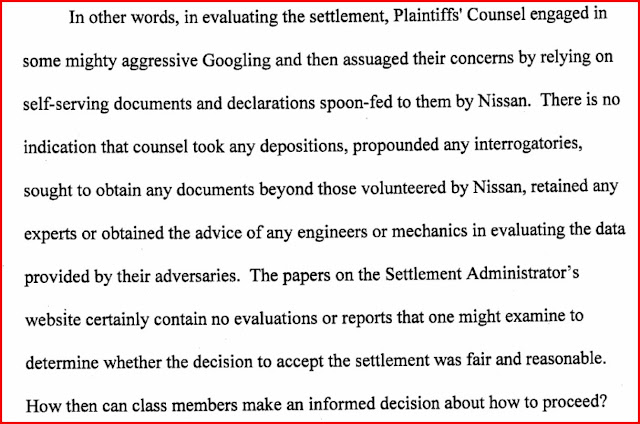 Any other lawyer would have been sanctioned for such "arguments" because they were:

(1) uncivilized;
(2) contained accusations of bad faith without grounds for it against an attorney;
(3) were frivolous because they claimed the plaintiffs' counsel had to conduct discovery before considering a settlement, which is not the law.

Neither Alex Kozinski nor his wife Marcy Tiffany were sanctioned for the contents of their frivolous objections by Judge Dean D. Pregerson, son of Alex Kozinski's long time colleague (and subordinate at that time) Judge Harry Pregerson.

On 11/05/2013 Alex Kozinski and his wife Marcy Tiffany filed "Amendment to Objections". 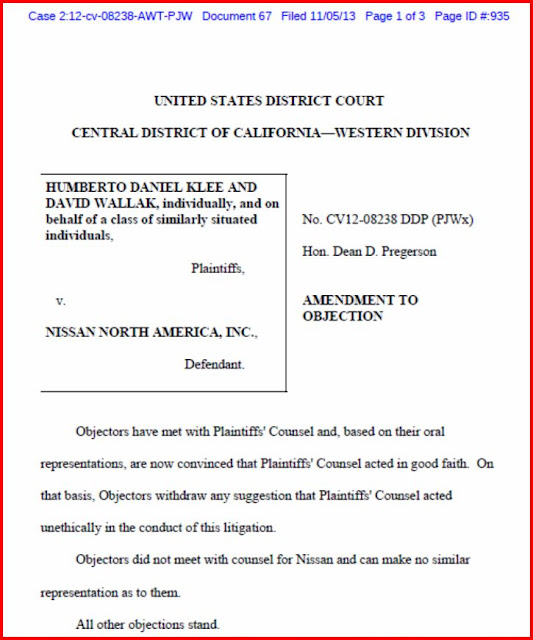 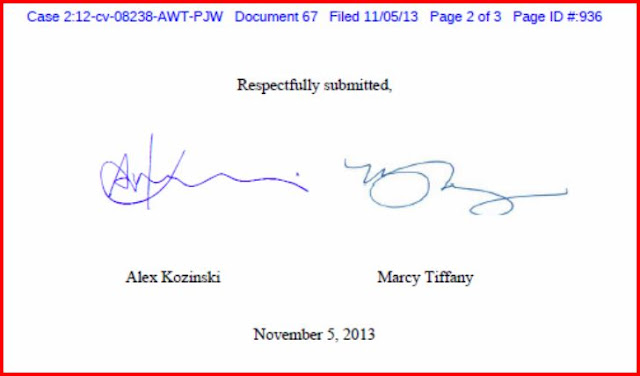 That same day, Judge Dean D. Pregerson recused from the case, starting a long string of recusals in that case.

I must note that Alex Kozinski not only knew that he is proceeding as a party in the court that is subordinate to his court and to him personally as the Chief Judge of the federal appellate court in that jurisdiction, but meant to use his influence as the chief appellate judge for that court from the very beginning.

Even though Alex Kozinski did not put that into his "objections", later on, in a video interview published on YouTube on November 14, 2014, after three judges recused and the action was stayed for mediation, Alex Kozinski then admitted that even before he filed his objections, he wanted to file them because he did not want to allow certain issues to be handled in a certain way in his Circuit.

Alex Kozinski specifically said in the video interview pertaining to his decision to file an objection - "Not in the 9th Circuit" (watch the video at the bottom of the article; if the video interview is promptly removed because of criticism in this blog, I have a copy).

Knowing his power, knowing that he has disciplinary authority over presiding judges - and attorneys - in a case where he appeared as a party, knowing that both judges and attorneys would be afraid to make a motion to transfer venue, it was the obligation of Alex Kozinski, ethically, to make such a motion for transfer because of appearance of impropriety.

Alex Kozinski did not make such a motion and the case proceeded in the Central California District Court.

What floored me were the actual reasons for Judge Dean D. Pregerson's recusal.

Here is the order of Judge Dean D. Pregerson's self-recusal dated November 5, 2013, more than a year after September 24, 2012 when Judge Pregerson was assigned to the case. 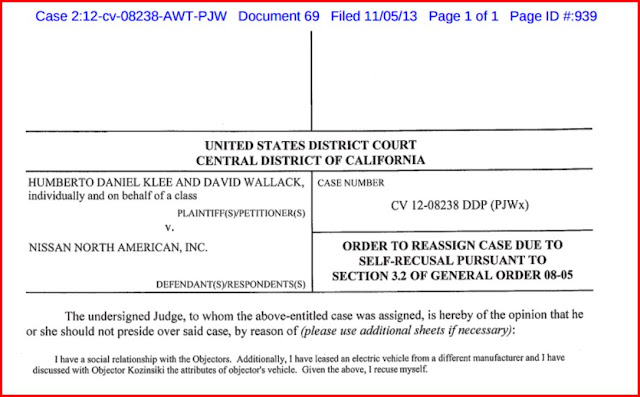 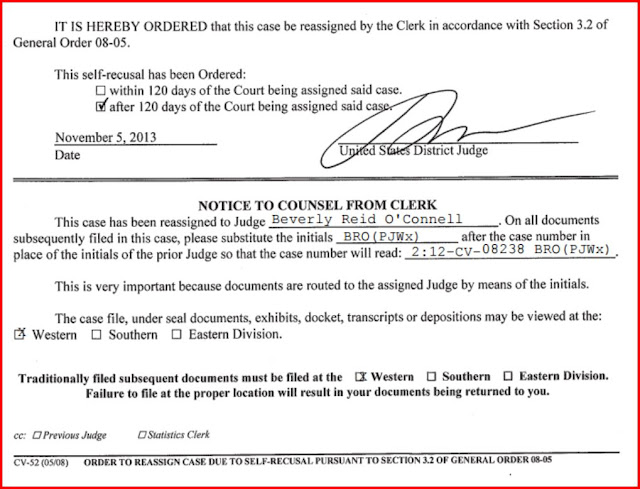 As reasons for his self-recusal, Judge Dean D. Pregerson wrote:

"I have a social relationship with the Objectors.
Additionally, I have leased an electric vehicle from
a different manufacturer and I have discussed
with Objector Kozinski the attributes of objector's
vehicle."

So, IN ADDITION to disqualifications because

(1) Judge Dean D. Pregerson's father Judge Harry Pergerson is a judge on the appellate court where potential appeals from Judge Pergerson's decisions will go; and

(2) that "Objector Kozinski" is his father's administrative superior; and

(4) had a social relationship with both Alex Kozinski and his wife;

(5) leased a vehicle similar to the one that was subject of litigation, albeit from another manufacturer; and

(6) Judge Pregerson discussed with Alex Kozinski the "attributes of his vehicle" - the very vehicle defects of which are the subject of litigation.

If a judge had a "social relationship" with the Chief Judge of the appellate court to which appeals from the judge's decisions routinely go, WTF (excuse my French) the judge is even DOING in that court, on any cases?

And, Judge Dean D. Pregerson only thought to disclose this "social relationship" with the Chief Judge of the appellate court only over a year into the litigation?

And the same about discussing with a potential class member attributes of a vehicle, thus obtaining extrajudicial knowledge that a judge may not obtain for any litigation?

And - the most interesting thing is that, when filing his and his wife's Objections (they were filed Pro Se, but in the same docket, Docket 50), Alex Kozinski KNEW that he was in a "social relationship" with the presiding judge, and KNEW that he "discussed the attributes" of his vehicle which is subject of litigation, with that presiding judge.

And said nothing - no disclosure to the opposing counsel at all.

Wow.  Wow.  Wow.  The arrogance of the judicial brethren surpasses any imagination.

Yet, there is more to come in the recusal saga within Alex Kozinski litigation saga.

Posted by Tatiana Neroni at 3:16 PM