Did Judge Dowd acknowledge his incompetence by raising the defense of absolute judicial immunity - based on Richard Harlem's legal viewpoint, he might have

In the ex parte secret Mokay trial, Richard Harlem was testifying as a witness as to the legal fees of his two law firms that he claimed as the only damages for the plaintiffs (by the way, plaintiffs' presence was not noted on record). 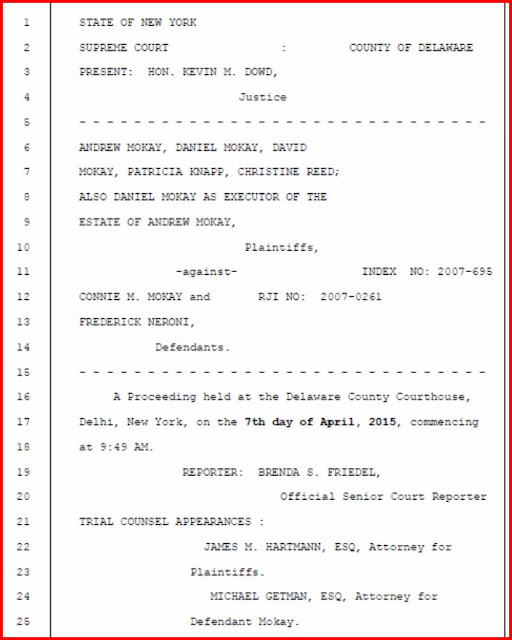 He was claiming, as damages, legal fees in "having to oppose" a motion that I made on behalf of Mr. Neroni - asking the court to apply the newly created precedent from the case where I sued an attorney for defamation, fraud and fraud upon the court.
In that case, the same court (another judge), Delaware County Surpeme Court, has granted the private attorney absolute judicial immunity for deceitful acts during litigation.
That was exactly the same as Mr. Neroni was sued for.
Absolute judicial immunity is, as applied by all courts, a jurisdictional bar to the court proceedings.
In other words, if absolute judicial immunity applies, the courts consider such immunity as stripping the courts of jurisdiction, and the courts have no longer any authority to proceed with the action on the merits.
That is exactly what I asserted in the motion.
Here is Richard Harlem's comment about that in his testimony at the ex parte secret Mokay trial on April 7, 2015 which was held without my presence, when I was at home with a back injury, after having duly notified the court of that injury and after presenting to the court a doctor's note releasing me from work. 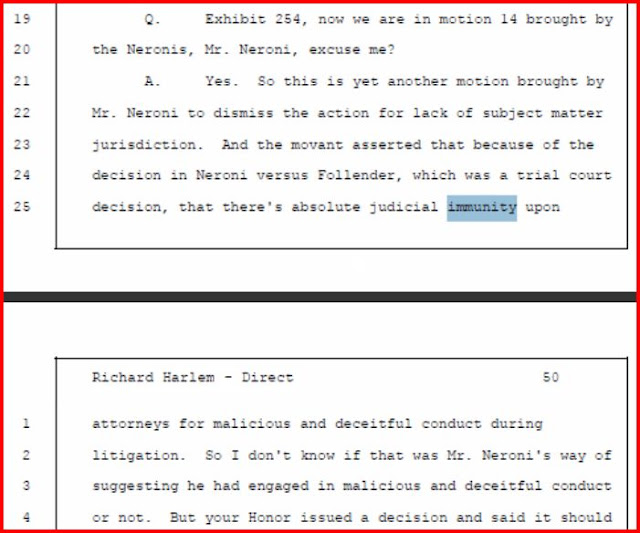 
Richard Harlem claims that by raising the defense of absolute judicial immunity, which was just granted to another attorney in the same Delaware County Supreme Court, Mr. Neroni somehow acknowledged misconduct.

That statement says a lot about competence, or rather, incompetence of Richard Harlem who apparently does not distinguish between juridictional defenses and arguments on the merits of a case.

Yet, when applied to judges who routinely claim absolute judicial immunity when sued for civil rights violations, that would then mean that judges acknowledge misconduct alleged in the court actions against them by raising that defense?

And, since Judge Dowd was sued by Mr. Neroni in a pro se civil action (dismissed based on absolute judicial immunity rasied by Judge Dowd), Judge Dowd acknowledged his misconduct that Mr. Neroni sued him for by raising that defense?

It is interesting how Judge Dowd will rule on this new rule formulated by Richard Harlem - when you raise a jurisdictional defense, you acknowledge allegations in the complaint on the merits.

Looks like Richard Harlem would benefit from another trip to law school, for an extended period of time.

Posted by Tatiana Neroni at 4:32 AM