New York DEC maps of "environmentally protected objects" are bluff, and it is now up to litigants in the Appellate Divisions, 1st, 2nd and 4th judicial departments to bring the NYS Court of Appeals to that realization


We received a "template denial" from the New York State Court of Appeals on our appeals as of right on constitutional questions in a case against New York State Department of Environmental Conservation. 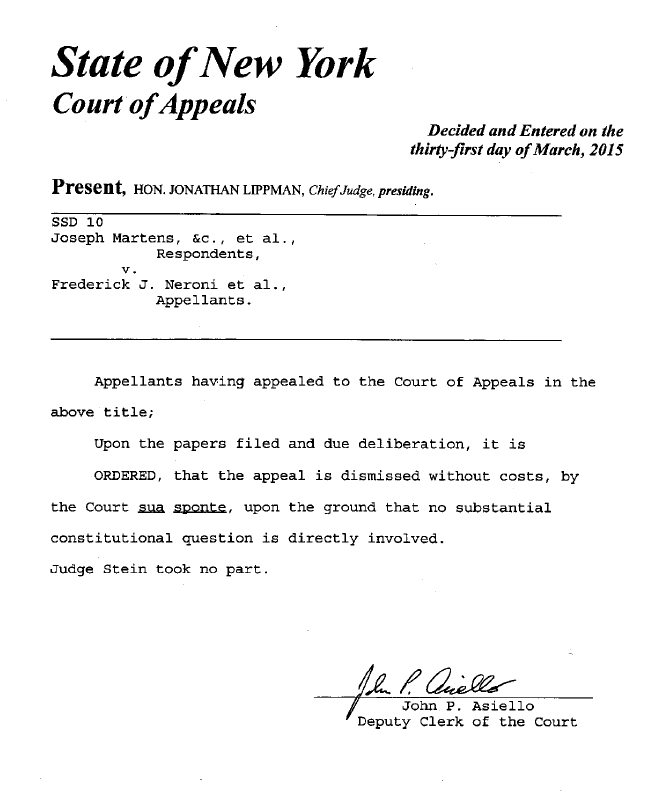 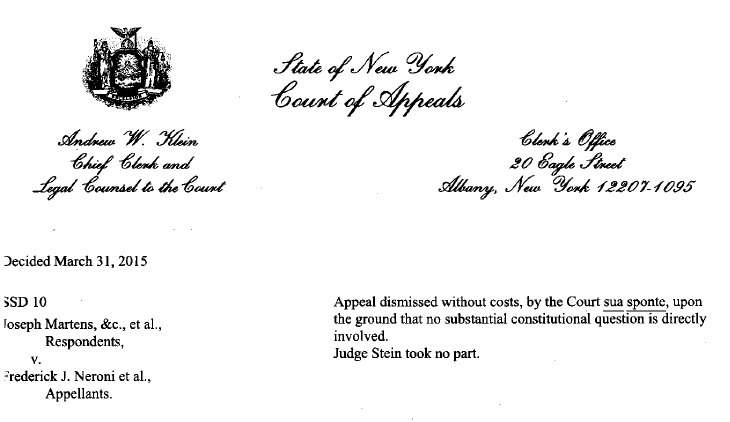 I know that such cases have to be decided by panels of 5 judges.

I only see the name of one judge (Jonathan Lippman) who "presided" over the case, and an indication that Leslie Stein did not take part (the same Leslie Stein who has made the decision in this case in the court below after being offered by the Chief Executive Officer, the Governor, what pretty much looks as a bribe, a nomination to that same Court of Appeals).

I also see that Judge Lippman defied his constitutional oath of office in this decision and usurped authority to pick and choose which constitutional questions that he has to review on appeal are "substantial" and which are "insubstantial".

Yet, here is what we have from the lips of Judge Lippman, the lecturer as to "justice for all" from all imaginable pulpits:

The issues in the case were crystal clear:  the government (and the courts) imposed upon my husband in 2006 notice of prohibited conduct (alleged protected stream) where the alleged stream was allegedly disturbed in 2001, while the notice was created in 2006, and that was not a map, but an affidavit of a DEC biologist, and while the map was and still is BLIND, UNREADABLE and cannot give any notice to anybody else.  Also, the DEC biologist's affidavit could only be used as an official DEC record for purposes of giving notice if it was filed with the NYS Secretary of State, with a notice to the public to give comments - which, of course, was never done, it was a self-serving document prepared for litigation 5 years after the DEC lost its case in criminal court.

Please, see for yourself if you can see any "protected streams" or tie the map to any addresses.  If you can, you can be awarded a crystal ball reader award, because in the DEC only one person can allegedly "read" that map - and that is the author of the affidavit of the DEC, biologist (not a map specialist) Jerome Fraine.
Can a notice go backwards?  Of course, not.
Can an affidavit of biologist created in 2006 serve as an official notice of a protected environmental object on the property in 2001?

Of course, not.
Can a blind map created in 1920s for a purpose that had nothing to do with environmental protection, did not list streams and did not allow to find any addresses, and the map named "Walton" give notice to a party residing in the town of Hamden, whose address is nowhere mentioned in the DEC or state court proceedings?
Of course, not - but this is to a rational mind.
For a mind that wants to favor the government no matter what, and to disfavor the Neronis no matter what, the "rule of law" works differently.
There was litigation in:
1) Hamden Town court - criminal proceedings against my husband were dismissed in 2001;
2) In 2006 DEC revived the same proceedings administratively - and held them in front of two administrative law judges.  The one judge who told the DEC that their case sucks got replaced;
3) in DEC - before the Commissioner of the DEC on appeal;
4) In Delaware County Supreme Court before Judge Becker
4) In NYS Appellate Division 3rd Department - where Judge Stein got a boost, a nomination to the NYS Court of Appeals, from the NYS Governor (the Chief Executive Officer of the State of New York and DEC Commissioner's superior) a week before  (surprise!) she made a ruling for the DEC.
5)we also tried to bring federal issues before the U.S. District Court for the Northern District of New York (that referred all federal constitutional issues back to the State Courts);
6) in the U.S. Court of Appeals for the 2nd Circuit  (that affirmed what the NDNY said, referring all federal constitutional issues back to state courts because state courts allegedly can fairly review federal constitutional issues);

7) as the culmination of all our efforts, New York state Court of Appeals, with Judge Lippman presiding (whom I described and mocked, along with his recently indicted buddy Silver, in many blogs), rendered a form decision, after harassing us and requiring us to produce voluminous records for their "review", that (surprise!) no "substantial" constitutional questions were violated or even involved.

Once again, our constitutional rights may have been violated, but not "substantially".

So, the court gets to pick and choose if an admitted violation of constitutional rights is "substantial" or "insubstantial".

I am not aware of any such right given by any authority to the New York State Court of Appeals.

So, ladies and gentlemen, the judges of New York's highest court, each one of whom took office by taking an oath to protect the U.S. Constitution, magnanimously allowed the executive branch of the New York State government to violate people's constitutional rights - if the court, in its infinite wisdom, but without any reasoning or explanation, decides that the constitutional violation was "insubstantial".

The court did not provide any criteria by which the violation is substantial or insubstantial.

I would say, if a person is required to pay tens of thousands of dollars for the alleged violation that he could not possibly have notice of at the time he did anything that is now claimed as a violation, that is a substantial constitutional due process violation.

I would say, it is a substantial constitutional violation, a violation of due process and equal protection of laws if a person is mandated by the court to destroy on his property a pond with wildlife on his property to make a stone "wrip-wrap" to allow "trout" to flow down the "stream", where there is no stream, no trout, and where the neighbor downstream ( who reported my husband out of spite and long since died) was allowed by DEC to build a contraption in that same stream that would have blocked any trout if it existed.

And - if a person is mandated to do the above simply because it pointed out to the government that ALL of its maps of "environmentally protected objects" are bluff.

We found that out, we raised that issue, we were punished for that.

That's why we are publishing this information and let the public know that, before paying the fines and agreeing to 'consent degrees" for penalties and 'remediation" on their properties, they may check whether the maps actually reflected anything on their properties.

The Court of Appeals did not take the case and did not resolve it on the merits.

Therefore, litigants in the 1st, 2nd and 4th departments - it is your turn challenging validity of DEC's maps of "environmentally protected objects".

When enough lawsuits are brought and when the issue cannot escape review of the New York State Court of Appeals, they will suddenly find the issue a "substantial constitutional violation".

If there is no major public outcry, people's admittedly violated constitutional rights, in the eyes of the highest New York State Court, are insubstantial.

Posted by Tatiana Neroni at 2:30 PM