If courts refuse to abide by its own orders, how can any court orders be binding on the public?

Here it is, again. 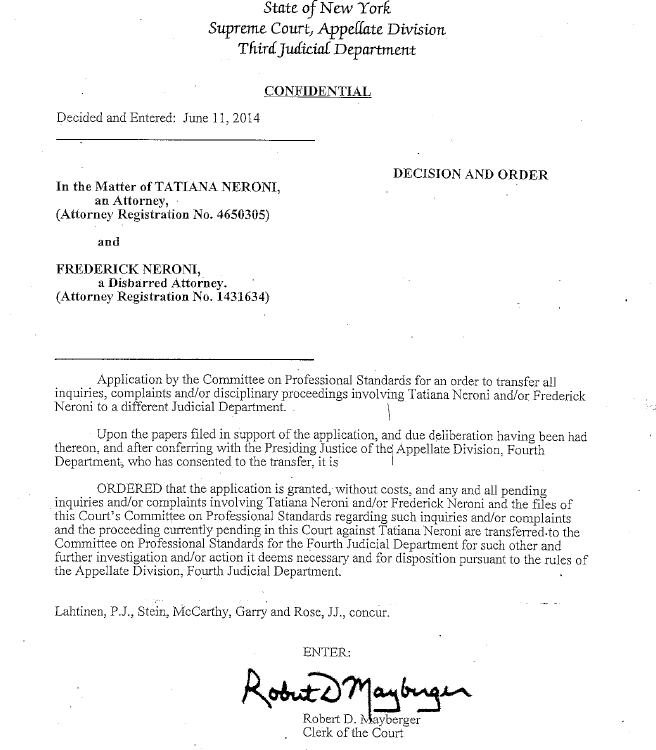 The order was based "upon the papers filed in support of the application".
The application was never served upon me, so it is an illegal ex parte order.
On receipt of the order, I immediately asked both the Appellate Division 3rd Department and the Appellate Division 4th Department for access to the following documents:
My husband Mr. Neroni did the same, since his name mysteriously ended up on the caption of my disciplinary proceedings, in violation of all fathomable laws and rules.
The 3rd Department, the court that had to transfer all records, including the requested records, to the 4th Department, answered with an outright denial of access,admitting that it unlawfully retained a portion of the record of my disciplinary proceedings that it was supposed to transfer.
The 4th Department responded with a list of papers that were transferred to it which did not include the requested papers, thus confirming that it is illegally proceeding with my disciplinary proceedings on an incomplete record and is illegally deciding a motion for a summary judgment on an incomplete record.
Recently, I double-checked with both courts about access to these records.
The 3rd Department now engaged the services of an attorney for the New York State Court Administration who treated me like a pest and practically told me that since the 3rd Department once denied me access to the records (without any legal basis to do so since all the requested records should have been transferred, by the 3rd Department's own order of June 11, 2014 to the 4th Department), I should not be asking for it again.
On receipt of the answer from the NYS Court Administration attorney on behalf of the 3rd Department, I sent a letter to the 4th Department asking it two simple questions:
(1) did it receive the application, papers submitted in support of the application and proof of service of all of those papers upon me since our last correspondence when the 4th Department stated to me it did not receive such papers;
(2) when will the 4th Department provide to me the evidentiary hearing that it ordered to be provided to me on September 30, 2014.
In answer to these two simple questions I received this letter dated April 10, 2015: 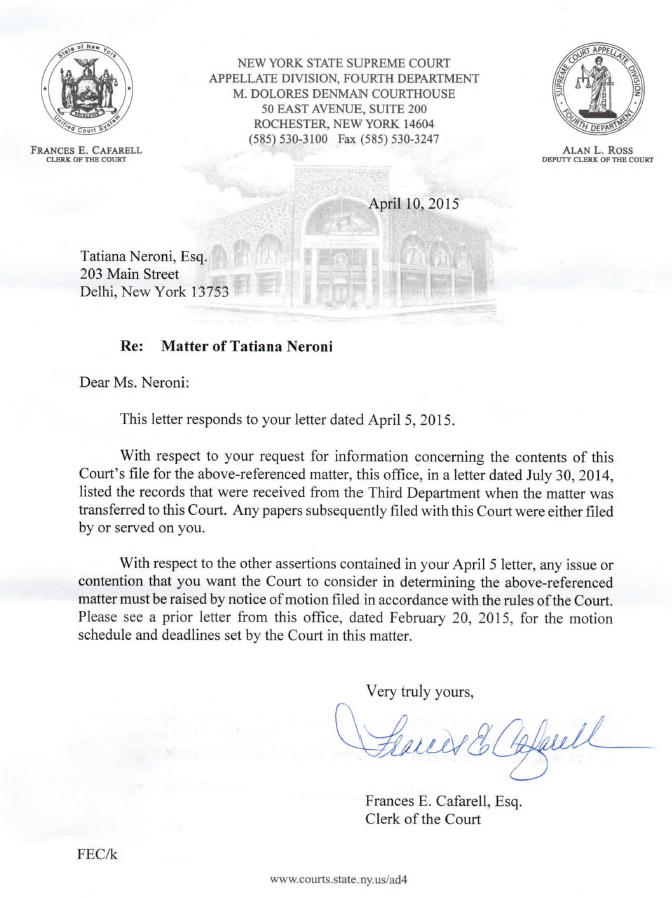