The quid pro quo a la Mary Gasparini and the disciplinary court, or more food for thought to Jonathan Lippman for his upcoming "State of the Judiciary" address


On February 6, 2015 I've written on this blog about Mary Gasparini's corrupt attempt to urge the referee in my case to file a fraudulent Referee Report and submit a falsified transcript to the court.

On approximately February 11, 2015 Mary Gasparini got enraged even more, because she received copies of two letters that I provide below. 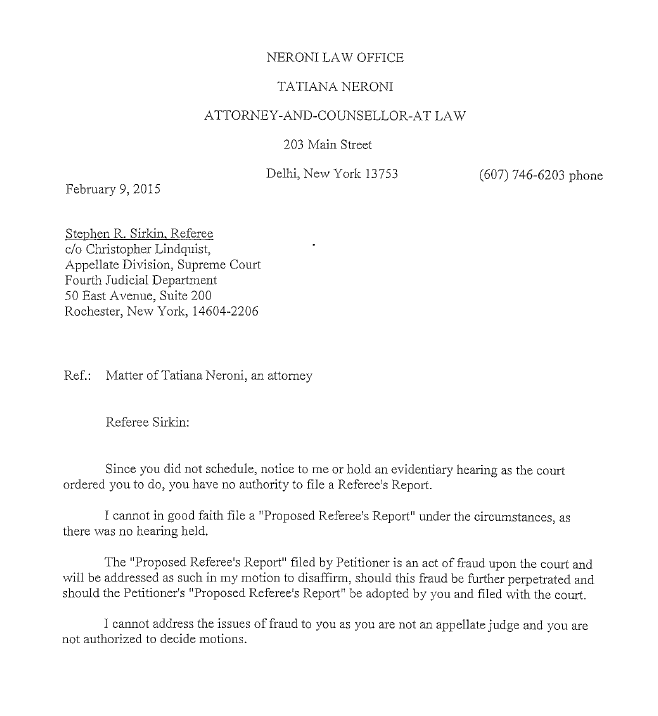 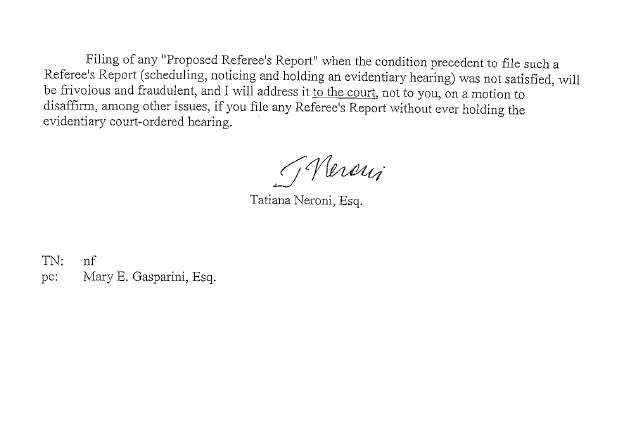 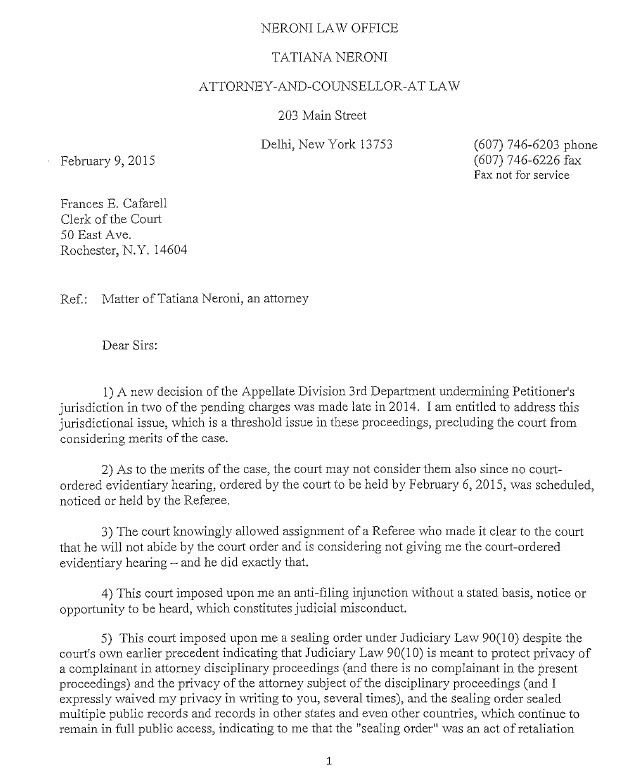 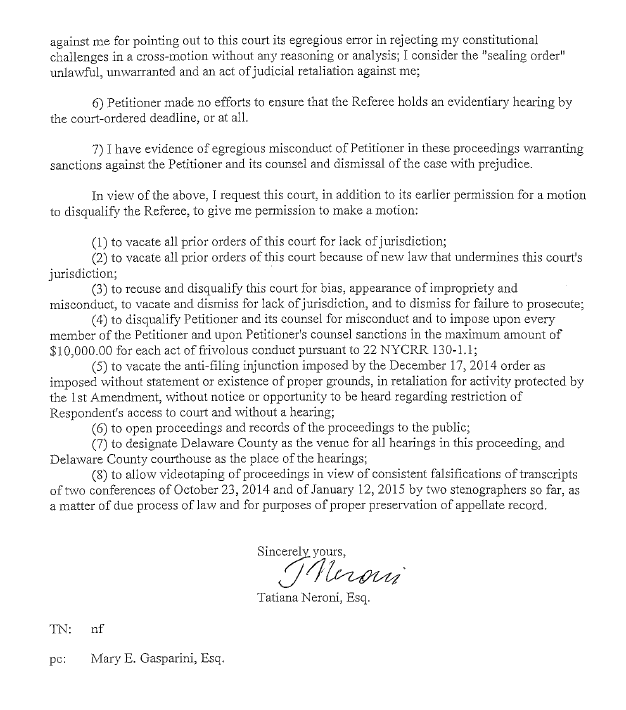 After receiving my letters, the court did not allow me to make the motions.

I am not sure who initiated that "discussion", but I have a funny feeling it might be the court, even though whoever initiated it, it is equally bad.

As a result of the court's legal advice to the Grievance Committee, the following masterpiece was born on February 11, 2015. 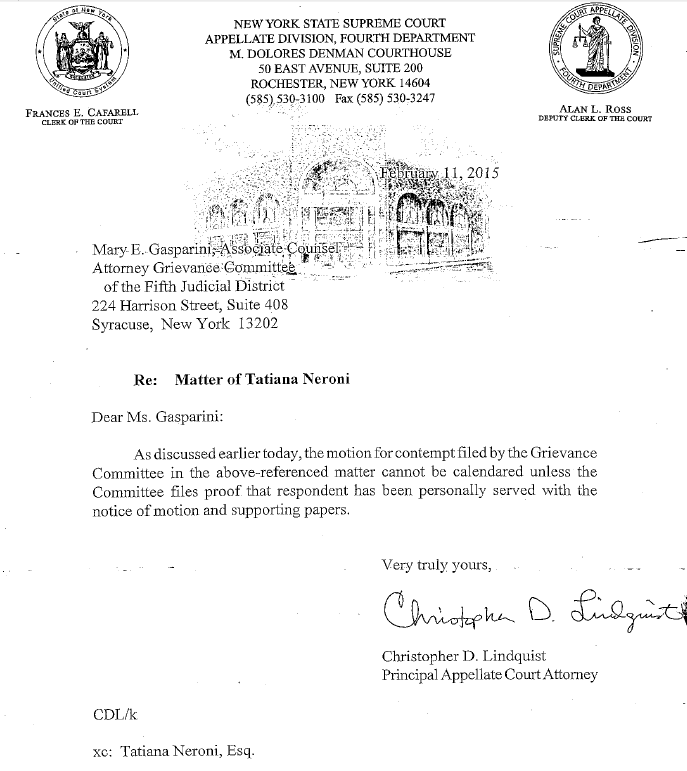 Based on that piece of legal advice by the court to the hopelessly incompetent Grievance Committee, I have sent to the court a request to step down.  We will see if the court has any remnants of integrity to actually do that. 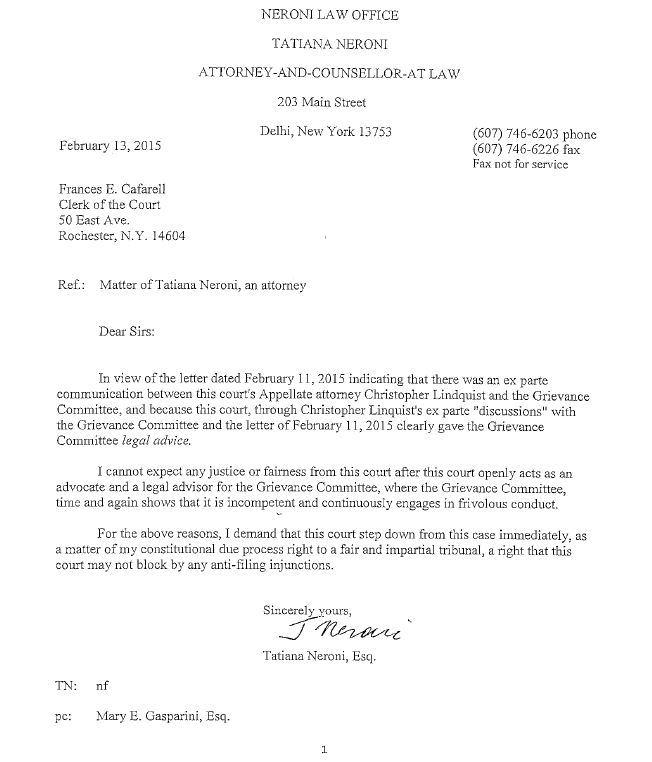 Oh, and by the way, on January 30, 2015 the U.S. Court of Appeals for the 2nd Circuit, its elderly judges who are usually assigned to the "fast-and-sloppy" track to decide civil rights appeal through "non-precedential summary orders", produced this masterpiece of legal thought in my husband's pro se federal appeal:

In that masterpiece, the three elderly judges (see the table of the names and ages of judges of the U.S. Court of Appeals for the 2nd Circuit here) "resolved" the issue whether it is constitutional for a disciplinary committee to be considered "an arm of the court" (which then clearly undermines legality of attorney disciplinary proceedings because the court then is the same as the prosecutor).

Here is how these three brilliant jurists resolved the issue:

The U.S. Court of Appeals for the 2nd Circuit, therefore, thinks that if it has a history of making unconstitutional decisions, they must be constitutional just because the court did it for a long time.

Which begs the question - should those elderly judges finally retire and absolve litigants of their presence, with such senile logic?

In fact, a rule as ancient as the ancient Rome, provides:

Yet, courts keep doing exactly that - do it wrong, do it wrong for a long time, and then claim that since they were doing it this way (right or wrong) for such a long time, it must be right.

As to attorney disciplinary proceedings, it is one slippery slope:

(1) From allowing courts and judges whose misconduct attorneys must challenge on behalf of their clients if they see such misconduct in front of them, to "regulate", or, in other words, control livelihood and reputation of those same attorneys who are criticizing the courts;

(2) To allowing the courts to actually make procedural and substantive rules pertaining to disciplinary proceedings against attorneys, appoint prosecutors, shape the structure of the disciplinary committees with super-majority of lawyers over lay public members;

(3) To "granting immunity" to both courts and the disciplinary prosecutors for malicious and corrupt acts during those proceedings, while the grant of immunity to prosecutors is based on the concept that prosecutors are "arms of the court" TO, finally, what the court did in my case on February 11, 2015 -

(4) openly giving the incompetent Grievance Committee advice as to how to nail me better.

Food for thought for Jonathan Lippman for his upcoming "State of the Judiciary" address on February 17, 2015.

Something is profoundly rotten in how attorney disciplinary proceedings are handled in New York.

In fact, it is the "arms of the court" that stink very badly.

And it is the courts themselves that stink very badly, together with their various "arms".

Hiding that fact and punishing those who inhale the stink for not professing that they smell roses, will not help.

Putting band-aids to treat this gangrene, as Judge Lippman appears to be planning to propose in his speech on February 17, 2015, will not help either.