That can lead to stripping the current and former Governor and Lt Governor of the State of New York of a good chunk of their salaries, as unconstitutionally received.

Here is the decision in full. 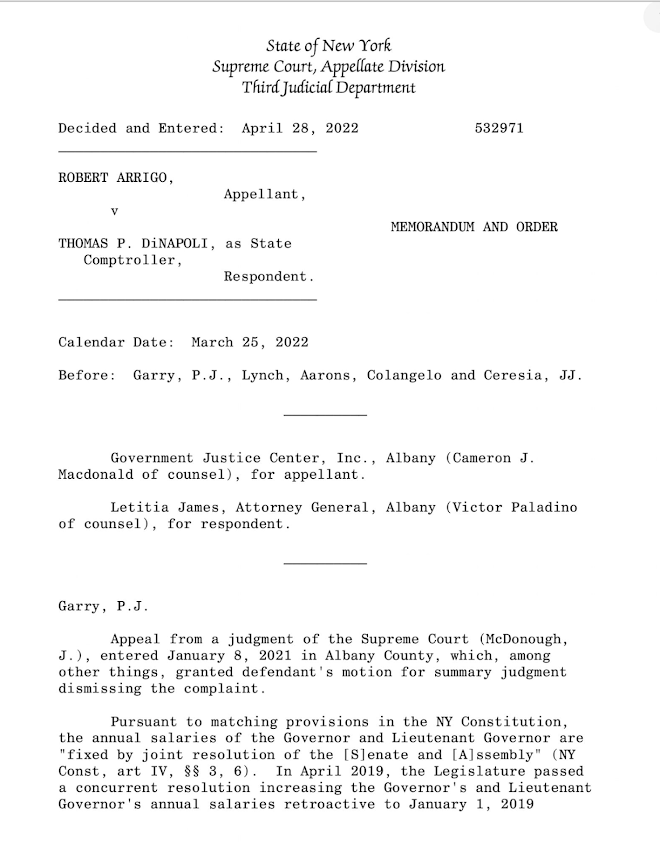 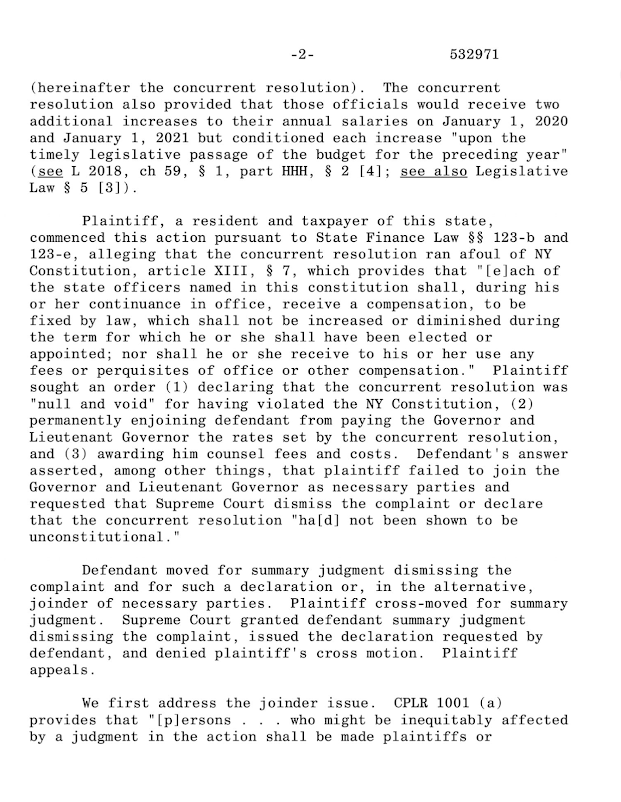 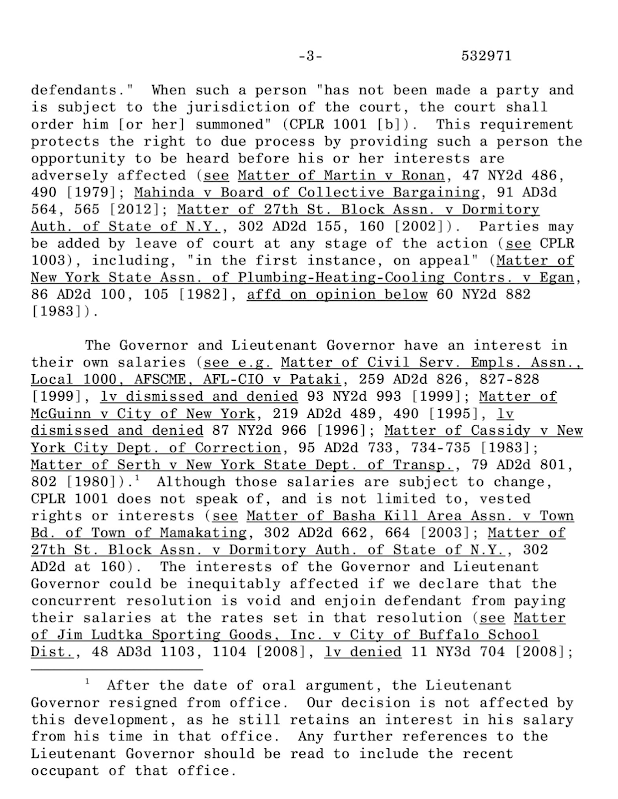 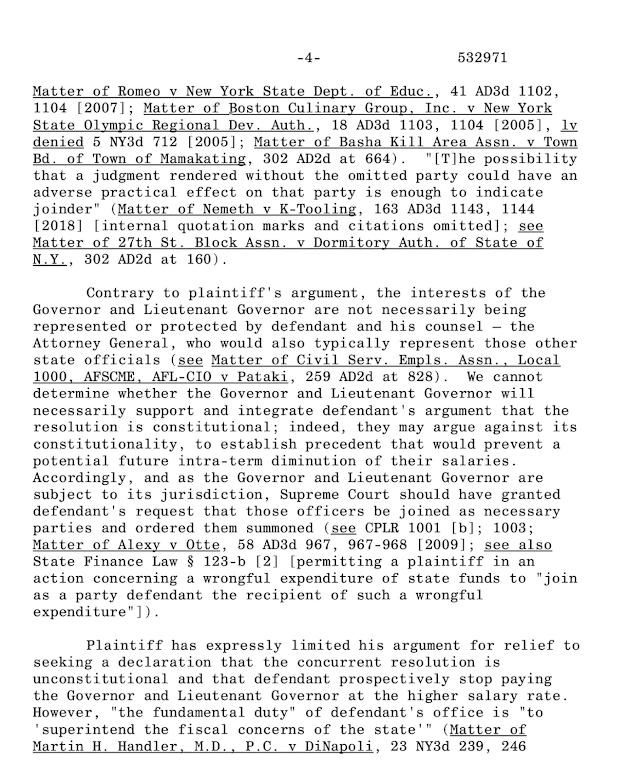 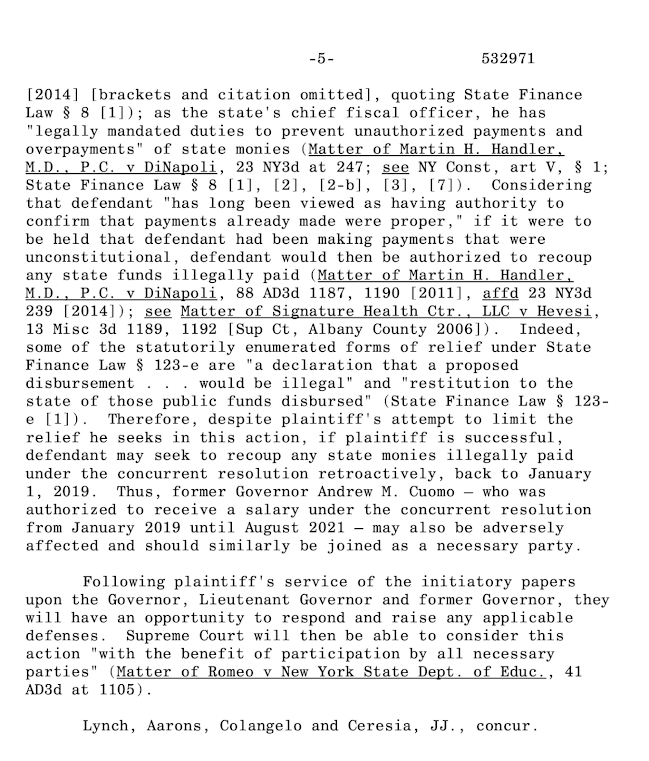 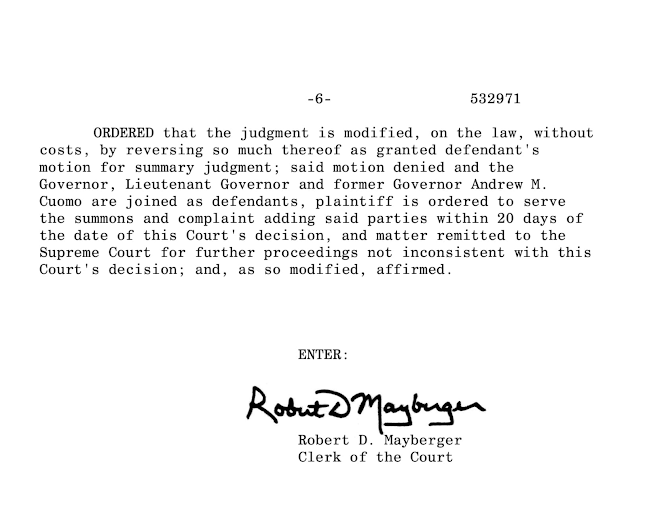 The decision leads one to raise interesting questions.

First, State Comptroller took an oath of office to uphold the State Constitution.

The NYS Legislature's sweetheart declaration raising salaries of Gov. Cuomo and Lt Gov. Hochul mid-term THREE TIMES was contrary to the text of the New York State Constitution (a separate issue is what New Yorkers are paying, through their collective noses, to NYS Legislature's legal department that allowed this declaration to go through).

A trick question - what has prevented the Chief financial officer of the State of New York to "just say no" and refuse to obey an obviously unconstitutional order of the State Legislature?

His career was more important than his oath of office, obviously.

Second, note WHO represents the defendant who illegally paid out salary increases knowing they are unconstitutional (any accountant would have been fired for THAT, not for disobeying that unlawful order.)

It is the pre-eminent NY AG Letitia James who portrays herself on social media and in leftstream media that she is defender of New Yorker's rights and enforcer of the law (while OPPOSING New Yorker's civil rights lawsuits in court, see Pacer.gov).

Here she also defend one violator of the law, a high-ranking violator, too.

And three - TA-DA, and note that this comes from the court that is also an ATTORNEY LICENSING/REGULATING authority in that same area.

The interesting conundrum is that, by the licensing rules of the App Div 3rd, Letitia James should have been stripped of her law license a long time ago for representing people with conflicting, often, opposing, interests, in the same litigation.

Yet, App Div 3 calmly state in the decision that Letitia James may do just that.

Because EVERY SINGLE JUDGE of the App Div 3 is ALSO Letitia James client - and she will vigorously defend them if they themselves are sued for some unconstitutional behavior.

Reducing both the value of the oath of office that every single one of these "public servants" give - and the licensing rules of attorney ethics, exactly to 0.

Posted by Tatiana Neroni at 9:36 AM