In March 2021, while still being a sitting judge of the Otsego County (NY) Family Court, Judge Brian D. Burns published a book "Co-parenting FROM YOUR CHILD's PROSPECTIVE".

So, the judge deems himself the voice not of justice, mind, but of one of the parties in a court proceeding, children - who are in such proceedings necessarily represented by their own attorneys.

Apparently, it is not enough for Judge Burns to appoint those attorneys.  He openly admits he is actually a child advocate and not a fair adjudicator.

Here are snapshots of his book, its official description and identification information on Amazon.com - and a couple of reviews, mine as a verified purchaser of the book and somebody else's, without a name - since that person is obviously afraid of Judge Burns' retaliation. 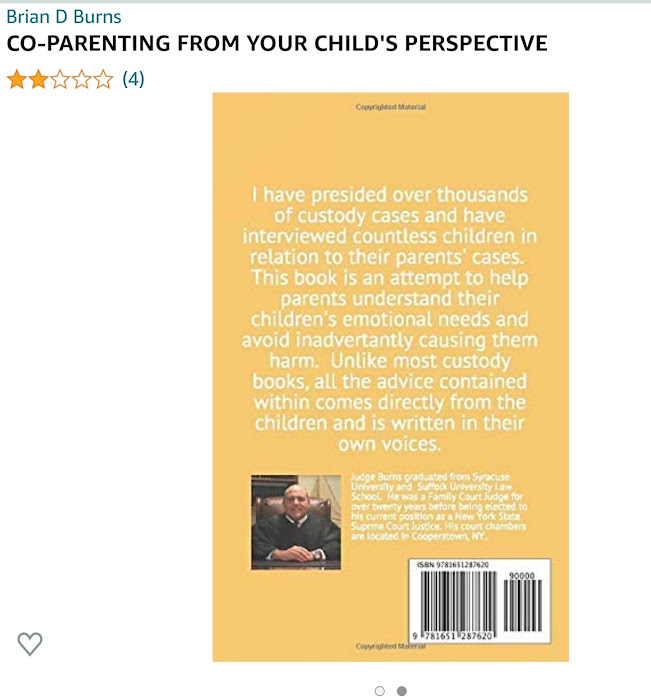 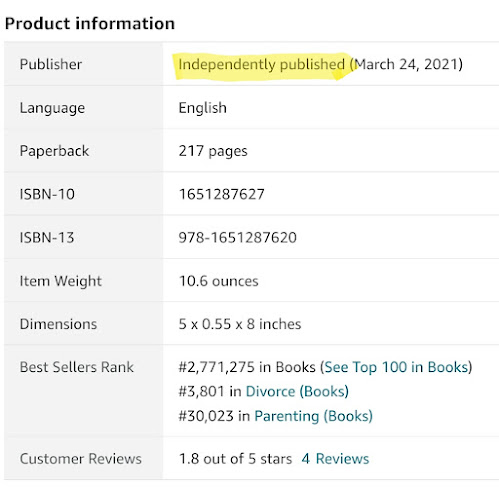 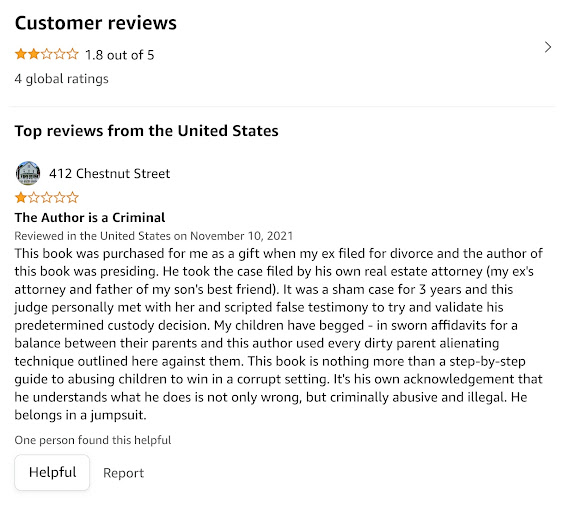 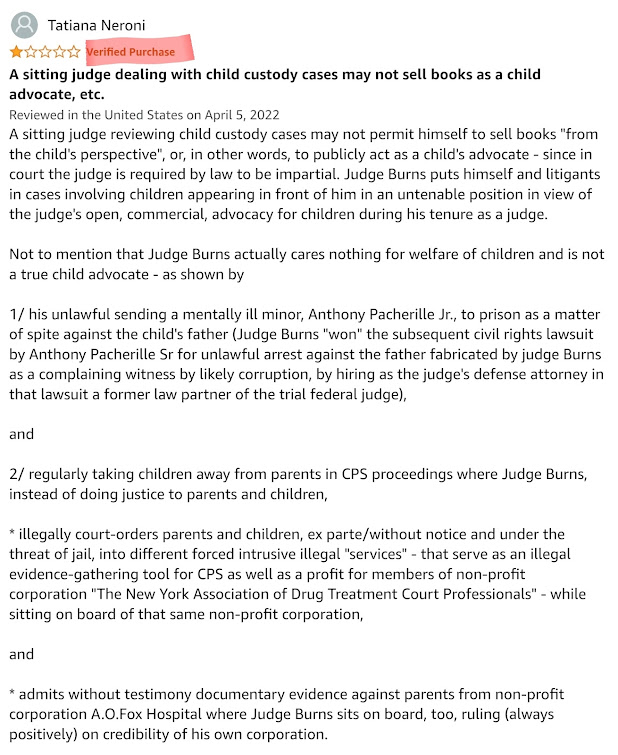 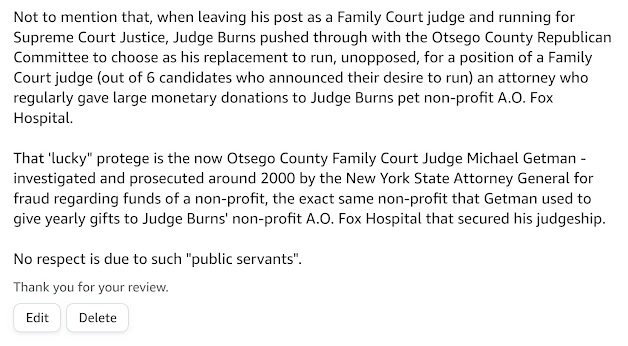 In my review I am relying on my own documentary investigation of Judge Brian D. Burns' misconduct described in my prior blog articles regarding Anthony Pacherille Jr and Sr's cases:
November 9, 2015, Part 1 -  The Anthony Pacherille story, Part 1 - for judge Brian Burns of Otsego County Court, NY, justice is for sale
November 11, 2015, Part 2 - The Anthony Pacherille story - Part 2. Judge Burns strikes back against the child because the child's father asked him for compassion
November 13, 2015 - the author's law license is quickly suspended (I doubt that it happened without request of Judge Brian D. Burns :).
November 18, 2015, Part 3 - The Anthony Pacherille's story, Part 3 - after the sentencing: thin skin, long arms, the sense of entitlement and the complete lack of integrity of Judge Brian Burns of Otsego County
November 18, 2015, Part 4 - The Anthony Pacherille story: Part 4 - freedom to protest in front of a public official's home
November 21, 2015, Part 5 - The Anthony Pacherille story - Part 5: Judge Burns hires a law firm with ties to the presiding magistrate judge in Tony Pacherille's federal lawsuit
I also described Judge Burns' monetary exchanges with the now-Otsego County Family Court Judge Michael Getman in my book published on Amazon.com.  The book quotes, based on review of documents of Dewar foundation and of A.O. Fox Hospital available in free public access, that Michael Getman (President of Dewar) gave regular LARGE donations to the non-profit A.O. Fox Hospital where Burns was on board.  And that is what is available in public access.  One can only guess what else Getman did to get Burns' favor, considering Getman's EXTENSIVE experience in defrauding that same non-profit together with his judge-father Frank Getman.
Shenanigans of the now-Judge Michael Getman and of his thief father Judge Frank Getman are described in a press release of the New York State Attorney General dated June 11, 1999.
At the end of the article I will post the full text of the release here, in case Getman would pull it from that site.
You see that in the press release the New York State Attorney General mentions that the millions of dollars in the Dewar foundation cannot possibly continue to be entrusted to these two theives, judge-father and his attorney-son
(same as it happened to another thieving couple, also from Oneonta, and also consisting of a thief judge-father and a thief attorney-son - who also were never punished and kept their law licenses, that is Robert and Richard Harlems, so thievery of judges together with their sons from non-profits or from clients is a time-honored tradition in Otsego County)
But, you know the money of which non-profit did Michael Getman use to buy Brian Burns' favor and get his current judicial position?
Of that very same Dewar foundation that NY AG stated in 1999 he cannot be entrusted with.
Since Michael Getman was son-of-a-judge, neither he, nor his thief father suffered any repercussions for their theivery, neither lost their law licenses, and Michael Getman was elevated first to Chief Otsego County Assistant District Attorney, Michael Getman perceived his impunity to prosecution for his crimes as a carte blanche to continue to engage in even more corruption with the help of the millions of dollars in the bank account of the Dewar Foundation.
He used that nonprofit to grease his way into a judgeship by buying favors of the "child advocate" (Anthony Pacherille Jr. will disagree) Judge Brian D. Burns to plow his way over the old women of the Otsego County Republican Committee who consider Judge Burns' "choice of a successor" as a directive to obey (I rely on creditable witness accounts after conversations last year with those old women regarding that directive).
As it appears, residents of Otsego County, New York, are lifelong masochists - since they continue to step on the same rake, over, and over, and over, and over again, electing one thief after another to judge over their liberty, property and family integrity.
Can I say - you deserve what you have?  You wouldn't have it if you didn't like it?  Since you are keep repeating and electing as judges thieves out of the same thieving families for years and decades?
---

Chief Judge Kaye has presented a sound proposal for meeting a critical challenge to the court system.

Attorney General Spitzer today announced a lawsuit against the board of directors of a private foundation in Oneonta for mismanaging the organization's assets. Those actions led to the loss of more than $1.5 million.

Spitzer's Charities Bureau filed the suit today in Manhattan Supreme Court against three directors of the Dewar Foundation — President Frank W. Getman, his son Michael and Nancy Lynch. The complaint seeks monetary damages from the defendants and their removal from the Board.

"It is the responsibility of my office to protect the assets of charities which are created to do good deeds in our communities," said Spitzer. "Because these individuals acted irresponsibly, they do not deserve, nor can they be trusted to oversee the millions of dollars still left in the care of this Foundation."

The civil suit alleges that the defendants violated their fiduciary duties to the Foundation because as directors they mismanaged the Foundation's assets or allowed them to be mismanaged in a way that harmed the not-for-profit corporation.

The A.G.'s action primarily concerns a decision in 1993 by Frank Getman to make an imprudent loan to a risky start-up mineral water business in California — Wheeler Springs Resorts.

Without any knowledge or approval from the Board, Frank Getman invested $1.5 million of the Foundation's assets in the company, along with $100,000 of his own money.

The loan entitled Getman to a number of personal benefits including a position on Wheeler's Board of Directors, $10,000 in annual director fees, and common stock and warrants.

After just a few payments, the company defaulted on the loan in November 1993. The loan, plus accrued interest, remain unpaid.

The State alleges that directors Michael Getman and Nancy Lynch breached their fiduciary duties when they failed to oversee the Foundation's financial activities and instead, allowed Frank Getman to make most of the Board's decisions.

They also failed to evaluate or question any of his investments, even after learning about the risky loan.

In addition, Frank and Michael Getman improperly collected rent money totaling more than $50,000 from the Foundation. The Dewar Foundation rented office space from the Getmans which subjected the Foundation to penalty under federal tax laws.

The Attorney General also seeks the appointment of a receiver who would be in charge of the Board while it re-organizes.

The Dewar Foundation was incorporated in 1947 and is well known in the Oneonta area as the legacy of Jessie Smith Dewar, a local resident who inherited a fortune amassed by her father from early stock investments in a company that was the predecessor to IBM.

The Foundation makes grants to a variety of local charitable organizations such as A.O. Fox Memorial Hospital and the SUNY College at Oneonta Foundation.

In 1997, the Foundation reported having assets with a fair market value in excess of $13 million and the distribution of grants totaling $564,800.

The investigation was handled by Assistant Attorney General Tynia Richard of Spitzer's Charities Bureau under the supervision of Section Chief Robert Pigott."

Posted by Tatiana Neroni at 2:47 PM