The New York Law Journal criticizing (somewhat) the sacred cow: something must be really happening with New York courts

My experience with the leading scholarship journal of the legal profession in New York, the New York Law Journal is one of disappointment.

There is nearly never any critical review published there of judicial decisions, usually just comments of WHAT a judge did, but no attempt to analyze WHY that was done, and no attempt to go into the judge's background and explore the judge's potential conflicts of interest to make this or that sensational - and sensationally wrong - decision.

NYLJ also gives its platform to former and present judges in their calls upon the legal profession and the public to defend judges as "having no voice" defenseless creatures - while the judiciary not only permeated with its "officers of the court" all branches of the government, controlling those branches through control of officers of those branches who are attorneys, but acquired a "well-settled" knack for making laws for the entire country and being entirely unaccountable in its misconduct.

Presumed honorable - with a self-given immunity for malicious and corrupt acts, that says it all.

So, it sounded to me like something unexpected has happened in the market of legal services and in the New York judiciary when New York Law Journal suddenly published an article vigorously criticizing regulators of attorneys, the New York court system.

Look at the language of the criticism:

Yes, New York’s Judiciary does handle more than 3 million cases per year, but they have a peculiar way of counting. For each petition filed in Family Court they give each child a separate docket number so if you have four children and file for custody it counts as four cases. They count Uniform Traffic Tickets and Parking Tickets as cases and include “both answered and unanswered cases.” For 2017 those tickets totaled 497,623 “cases” without which the total filings would be well below 3 million.


Just to put this in perspective, there were 4,671,265 filings in 2008 which is 41 percent more than 2017. The budget for 2007/2008 was a little more than $1.6 billion. The Judicial Budget for 2019/2020 is an all-time high of $2.336 billion, an increase of $44.7 million from last year. Just five years ago it was $1.81 billion even though there have been significant decreases in filings every year. When you add all costs, the judiciary spends about $600 million more but the budget never mentions the actual sum spent by the Judiciary. For example, in 2018-2019’s budget the request was $2.23 billion but the Chief Administrative Judge’s Annual Report four months later said that $2.96 billion was approved.


New York’s court system is the most expensive per capita in the country and possibly the world. It amounts to $117 per citizen just using the State Operations Budget request of $2.336 billion, but using total funds it is over $150 per person. Florida has many more people than New York but runs its judicial budget on $27.09 per person. The United States Judiciary costs $22.25 per citizen."

Catching the court system red-handed in padding up the statistics of case-filing by gerrymandering docket numbers?
Blasting State Chief Judge DiFiore's "Excellence Initiative" as the possible justification of unjustifiable padding up and increasing the budget while the actual number of filings actually dropped 41% in just 9 years?
What is going on in New York?
Do more people leave the state than is officially reported?
Case filings in court dropping nearly TWOFOLD in just 9 years?
Access to court blocked by courts artificially by different tricks, for judges to have less work?
Just when judges pushed through (with the help of attorneys and bar associations judges control through control of their law licenses) an increase of salary for themselves?
While THREE major whistleblower lawsuits were either settled or are pending at this time - whistleblowers being EMPLOYEES of the court system?

By the way, with the drop in filings, the increase in salaries, the increase in the budget, the pending lawsuits regarding misconduct of judges - and New York Court Officer Associations' demand that a new body be created to control budgetary spending of the court system, because the current oversight bodies are not to be trusted (say the insiders) - judges do not even have to "do their time", come to work on time and spend their work day where they are supposed to, in the courthouse, in the courtroom, doing their work.
There was a standoff - at least, as reflected in the media - this year between Governor Cuomo and his friend and nominee Chief Judge Janet DiFiore over whether judges should present to the public their time-sheets showing when they come and leave their workplace.
The standoff "died quietly".
Cuomo finally ceded the fight to DiFiore, so now, as before, New York State judges do not have to show the public, the mere mortals (and the judges' employers, by the way), the paper trail proving that they actually work for that increased salary.
And still.
A 41% drop of case-filings in court in 9 years?
While New York judges
So, was the New York Officers association correct in calling New York Court Administration and court system organized crime? 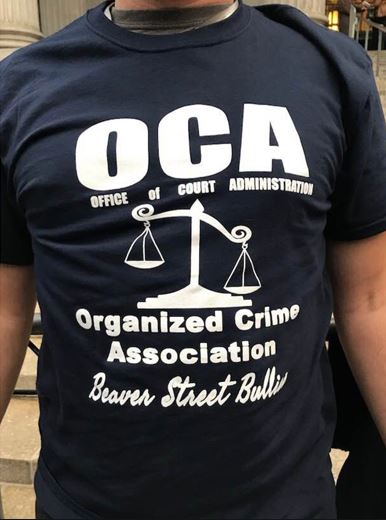 Even court attorneys have had enough - to the point of losing the fear of being fired and losing the licenses and speaking out, and recording judges, and filing lawsuits?
Even court officers unions calling the court system organized crime and demanding to put some money from budget increases towards support personnel, not just judges, their salaries for work without timesheets or accountability and their discretionary budgets they use without any oversight?
Even the usually timid-as-a-mouse New York Law Journal that is never raising a critical argument about a judge, no matter how bad a judicial decision or conduct is?
What is going on?

Posted by Tatiana Neroni at 4:28 AM