I wrote on this blog about a judge who handcuffed an attorney for arguing against detention of an indigent criminal defendant.

After an uproar in the social media and after the "handcuffing judge", Judge Hafen, was ousted by voters, the defendant who was sent to jail because the judge was pissed that the public defender did not stop defending her client when she was told to - was released by another judge, Judge Rob Bare.

The defendant was released pending appeal of Judge Hafen's decision.

Even Judge Rob Bare who released the defendant stated that "[a] lot of meaningful things were covered that, respectfully, a lawyer could potentially weigh in on,” Bare said. “But even if the lawyer chose not to weigh in, it troubles me that a judge would speak directly to a now-unrepresented client in this regard.”

So, Judge Bare implied that the handcuffed attorney should have said even more than she already did.

Yet, Judge Bare blamed THE ATTORNEY and not Judge Hafen who ordered the attorney not to speak and handcuffed her when she did, so how was the attorney supposed to "weigh in" if she was handcuffed even for arguing as much as she already did?

There are interesting coincidences between two judges, Judge Hafen who handcuffed attorney Bakhtary, and judge Rob Bare, who released the defendant (no doubt, under the pressure of the storm of disapproval by the social media), but still continued to blame the handcuffed attorney, now for not arguing more than she did when she was handcuffed by Judge Bare's fellow judge Hafen.

Same as Judge Hafen, Judge Bare is a white male. 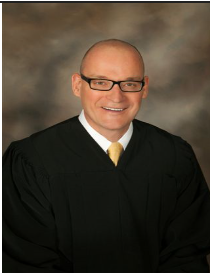 In his official court biography Judge Bare was quoted as saying:

"I give every ounce of my energy, every day.  I am proud to be a judge.  Respectfully, consideration of judicial ethics is very important to me.  Please know that integrity and professionalism are everything to me.”

Moreover, Judge Bare is one of the judges enforcing attorney discipline in the State of Nevada.

How appropriate and ethical was it for the judge to blame the female attorney who was already handcuffed for making an argument on behalf of her indigent client, to blame her for not making MORE argument, but, not to make any disapproving statement regarding behavior of the fellow male white judge who handcuffed her for doing her job?

And this is the man who enforces attorney discipline in the State of Nevada?