In my practice of law I have come across terms that are, in usual life, designations of emotions or moral principles.

It is anybody's guess how emotions or moral concepts wormed their way into the legal terminology, but they are there, and they may affect your rights (as well as mine).


Conscience of the court

Here is the Merriam-Webster definition of what "conscience" is. 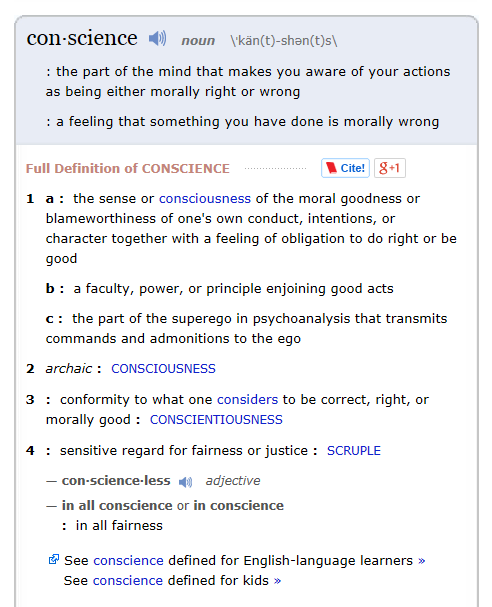 It is apparent that "conscience" should not be chosen as a legal term defining people's rights, because it is (1) subjective, (2) vague, (3) non-transparent,  (4) unreviewable by an outsider/appellate authority.

Yet, there exists in the American jurisprudence not one, but two terms involving "conscience of the court".
﻿

(a) The "shock the conscience of the court" test

This is the test about which I heard one appellate attorney tell another in the hallway of an appellate court - "but that threshold is impossible to meet!".  And then the attorney cautiously turned around to check out who may have heard the statement and apologetically said "well, of course, I do not mean that the court has no conscience"...

The attorney was right.


That test is (nearly) or, realistically, actually impossible to meet, and for a reason.

A body of government cannot have a conscience.

A panel of several judges cannot have one uniform conscience.

Rights of people cannot rest on whether a single judge does or does not have a conscience that may be shocked.

There is no uniform test as to what a conscience is, whether a certain individual does or does not have it, and what kind of threshold deeds must or must not shock that elusive conscience.

The "test" was frequently criticized by the scholars, but it is still there...

(b) Searching the conscience of the court

This test is used in by New York state judges deciding a motion to recuse filed against them.

So - searching the conscience of the court is also an exercise that proves that the courts are not really separated from the church.  It is a rather mystical experience, and one must have blind faith to believe the judge in what he says without having any proof of validity of his/her claims, and no guidelines for application of this test.

Since the test is defining a fundamental constitutional right of litigants, the right to a fair and impartial tribunal, my belief is that litigants are entitled to more than having the object of their motion for recusal alleging misconduct or conflicts of interest, or an appearance of impropriety searching their own conscience.   Announcing that your federal fundamental constitutional right to a fair and impartial tribunal, as New York judges do, is, in my view, the height of arrogance and disdain to the rule of law and to the oath of office that they took when they donned their black robes.

And, as I stated earlier in my blog, peremptory challenges to judges instead of motions to recuse that more often than not bring sanctions from those "unbiased" judges who "searched their conscience" and found "no hard feelings" against the moving party, are long overdue in New York.

Also long overdue is a legislation expressly prohibiting judges to punish attorneys and parties for making a motion to recuse and/or disqualify and announcing such decisions, if made, void as a matter of law without necessity to move to vacate them, because such efforts, as I am finding out, will be blocked by the courts on any possible and impossible pretexts.

Contempt is defined by Merriam-Webster dictionary as follows: 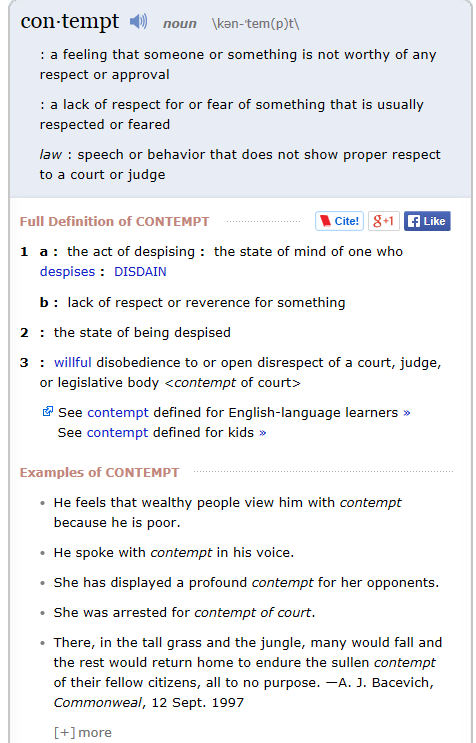 It is a feeling of lack of respect or approval.

At law, it is a lack of "proper" respect to the court or a judge which is demonstrated in speech or actions.

Now, what is "proper" and "improper" is a subjective call.

Whether a certain person is or is not entitled to respect, is a subjective call.

Whether the government is entitled to respect - is, on the other hand, a constitutional issue.

In a classic 1st Amendment case an individual was convicted for burning the American flag.

The conviction was overturned because the American flag is also burned to dispose of old flags.

Thus, the U.S. Supreme Court reasons, what is being punished is the expression, that the flag was burnt in protest against governmental actions - and that is within the core protection of the 1st Amendment.

Well, protest against actions of any branch of the government is within the core protections of the 1st Amendment, and that includes the court.

Thus, the requirement that the court

(1) must be "duly" respected (even though judges self-servingly absolve themselves from suits for malicious and corrupt acts on the bench and retaliate against those who point out their misconduct, which is contemptible conduct not warranting any respect);

(2) that the judge who thinks you are not "properly" respecting him can summarily, as an accuser, prosecutor, judge and jury, punish you criminally if the alleged contempt happened in his presence

should long ago be eliminated out of American jurisprudence.

The government is entitled only to so much respect as it has earned.

In fact, the only thing the government can require from its citizens is for them to abide to the rule of law.

When a judge is violating the law before your very eyes or in a court order, what constitutes the rule of law, becomes fuzzy.

My firm belief that the words "contempt" and "conscience" should be eliminated out of the legal terms of the American jurisprudence and strict constitutional standards must be enacted by the Legislature and enforced as to rights and duties of judges, parties and attorneys in the courtroom - with equal obligations of decorum and deportment.

Isn't that contempt of the rule of law?


Trust/faith/belief in the integrity of the judiciary

Trust is defined by Meriam-Webster dictionary as follows: 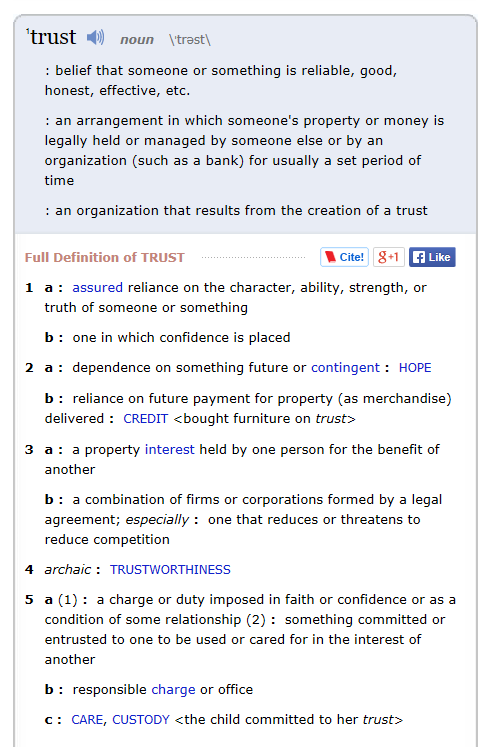 The public is expected to trust in the integrity of the judiciary, allegedly so that the rule of law be maintained in the country.

Attorneys are supposed to maintain that trust and not undermine it, at the fear of losing their livelihood.

As far as I could see, the judiciary as a whole makes no efforts to earn that trust and every effort to breach it.  What of self-imposed immunity for malicious and corrupt acts on the bench, what of retaliation against whistleblowers of judicial misconduct that not only I, but other attorneys and scholars are concerned about.

A reasonable person cannot trust in the integrity of an individual who uses his power to proclaim himself immune from liability for malicious and corrupt behavior.   Such a person would cause in reasonable people suspicious and contempt, not trust.

To require trust from the public and maintaining that trust from attorneys is an equivalent, in my opinion, of installing the judiciary as a type of deity which can do no wrong and should be worshipped no matter what.

It appears that the American judiciary has significant narcissistic/mania of grandeur issues, and evaluation and treatment is long overdue.