Chief Judge Sharpe of the U.S. District Court for the Northern District of New York dismisses a civil rights case without reaching the merits - but with a lot of disrespect to the plaintiff

I continue to analyze the amazing decision of Judge Gary L. Sharpe dismissing my husband's civil rights lawsuits, made 3 weeks after I sued Gary L. Sharpe in his individual capacity.

Here are a couple more of amazing snippets from the decision. 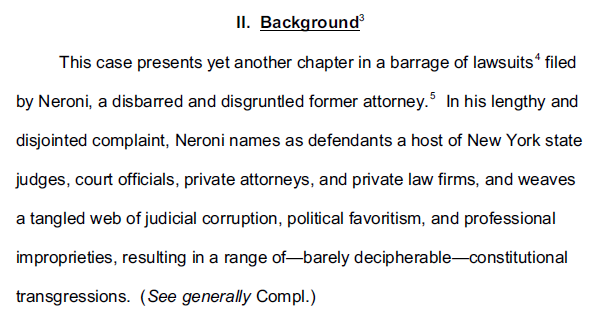 This is how the lawsuit - and the decision - are introduced by Judge Sharpe.  In the "background" section Judge Sharpe does several diametrically opposite and mutually exclusive things.

(1) In footnote 3 Judge Sharpe states that "the facts are drawn from Neroni's complaint and presented in the light most favorable to him".

(2) Then, Judge Sharpe characterizes those facts, allegedly in the "most favorable light", yet, using the following derogatory language:

It appears that Judge Sharpe pays lip service to the law requiring review of plaintiff's facts on a motion to dismiss in the light most favorable to the plaintiff, but his attitude and the language of presentation of those facts speak louder than his declaration of intention.

To me, as a professional linguist with a Masters degree in teaching the English language, this phrase tells a story of bias and derogatory attitude to Mr. Neroni.

The inferences that may be reasonably drawn from the language in the phrase are that (1) Mr. Neroni was rightfully disbarred;  (2) is upset about losing his disciplinary proceedings and (3) is lashing out at anybody in sight because of his disbarment.

How correct and proper Mr. Neroni's disbarment was, and whether Mr. Neroni is legitimately upset about how it was brought about, you can judge after reading this material.

Moreover, since Mr. Neroni's disbarment is mentioned, it appears that the language (1) must bear some relevance to all lawsuits referenced by Judge Sharpe in his footnote to the "Background" section and (2) that all those lawsuits were dismissed on the merits, so the court has a right to make credibility disrespectful credibility determinations about the "barrage" of lawsuits and "indecipherable" tales of "a tangled web of juridical corruption" etc.'

In his footnote 3 to the "Background" section  Judge Sharpe references four lawsuits brought by Mr. Neroni as a "disbarred and disgruntled former attorney":

The Mokay case, which is still pending and due to which Mr. Neroni lost his license without a hearing after 37 years of practice is a separate saga.

I am preparing a separate book, based on documentary evidence, as to how every applicable law in the Mokay case was bent or broken in order to decide for the plaintiffs' conflicted attorneys and to deliver to them money damages out of my husband's pockets.

The plaintiffs' attorneys in the Mokay case were from the beginning the retired judge Robert Harlem (deceased since 2012) and his son Richard Harlem (alive and still on the case).

Robert Harlem and Richard Harlem were caught for misconduct in, "coincidentally", an Estate matter in 2000.

Robert Harlem practiced law and drafted a will while being a sitting Supreme Court justice, in violation of the New York State Constitution, and involved in the signing of the will and additions to the will his law clerk, his confidential secretary (later his wife) and his son Richard Harlem.

Then, Richard Harlem submitted the will to the Surrogate's Court with a backer showing his name and not his father's name, which the New York State Attorney General saw as a sign to conceal from the court the fact that the will was illegally drafted by a sitting Supreme Court justice.

Robert Harlem then quickly retired from the bench before his term was up in anticipation of the bounty from the will where he bequeathed to himself several thousand shares of stock of the IMB Corporation, designated himself as the 3rd Executor charging fees to the Estate and bequeathed the residue of the 9 mln dollar estate to the trust where he was a salaried trustee.

Such self-dealing was a no-no for an attorney even if Robert Harlem had a right to practice law, but, at the time he drafted the will and codicils/additions to the will, he was a sitting Supreme Court justice and was absolutely prohibited by the New York State Constitution to practice law.

Robert Harlem, according to the New York State Attorney General's office, resisted disclosure that he was the author of the will and codicils for a year.

Then, Robert Harlem claimed that even though he drafted the will and codicils, there was nothing wrong in doing so, even though he did that while being a sitting judge, because the decedent was his friend.

The NYS AG turned Robert Harlem and Richard Harlem into the Professional Conduct Committee for their shenanigans.  The case that obviously warranted disbarment of both attorneys, died there.

Then, Mr. Neroni turned attorneys Robert Harlem and Richard Harlem into the Professional Conduct Committee in 2006 due to their outrageously conflicted representation in the Mokay case where they represented party plaintiffs and a de facto party defendant which the NYS Appellate Division 3rd Department acknowledged.

Since the member of the Committee John Casey appeared to use the Committee for picking influential clients or members of his firm, the Harlems were saved, John Casey's law firm, instead of disbarring them for their shenanigans in the Estate of Blanding (Otsego County), embraced them as paying clients, and instead the complainants against them, Mr. Neroni and I, were prosecuted, and Mr. Neroni was disbarred.

It is apparent that courts refuse to apply the applicable laws which favor Mr. Neroni and instead invent laws that disfavors Mr. Neroni and favors his politically connected opponents.

Therefore, Mr. Neroni, an attorney who has faithfully provided zealous representation to public in an under-served poor area, and practically had for years an ongoing free legal clinic in his home where anybody could come or call for legal advice at any time of day and night, has every right to be upset, and "the web of judicial corruption" is a reality in New York courtrooms.

While obviously mocking Mr. Neroni's attempt to untangle the truly existing web of judicial corruption in New York courtrooms, while at the same time  hypocritically claiming that he reviewed Mr. Neroni's facts in the "light most favorable" to Mr. Neroni, Judge Sharpe did not reach the merits of Mr. Neroni's case, and thus has no right to make credibility determinations, because that is the function of a factfinder, and Mr. Neroni asked at the outset of the litigation for a jury trial.

Judge Sharpe has two options - dismiss without reaching the merits, but then not reach the merits of the case he so dismissed for any reasons or purposes, or allow the case to proceed to discovery and trial and let the jury to decide issues of merits, as Mr. Neroni demanded and has a right to.

Judge Sharpe chose the third, unlawful way, he both dismissed the case without reaching the merits and made disparaging remarks about credibility of Mr. Neroni or substantive validity of his claims.

So much for the rule of law in Judge Sharpe's understanding.

Posted by Tatiana Neroni at 7:59 AM