New York Governor Cuomo has until the end of day on Wednesday, March 27, 2019, to sign into law the new amendments for the Commission for Prosecutorial Conduct.

I consider the new amendments a very bad idea and am vigorously opposing it - since it is going to be populated with the same players who routinely cause wrongful convictions, it blocks the public from participating in the work of the Commission (all members of the Commission are to be licensed attorneys or ABA-approved law professors who will never deign to criticize or prosecute "their own" or get to the true causes of wrongful convictions - prosecutorial and judicial immunity for malicious and corrupt conduct, lack of transparency in criminal cases and lack of equal-with-civil cases discovery rights in criminal cases).

The DA Association, whose lawsuit has triggered the pre-agreed-upon (according to insider Jeffrey Deskovic, 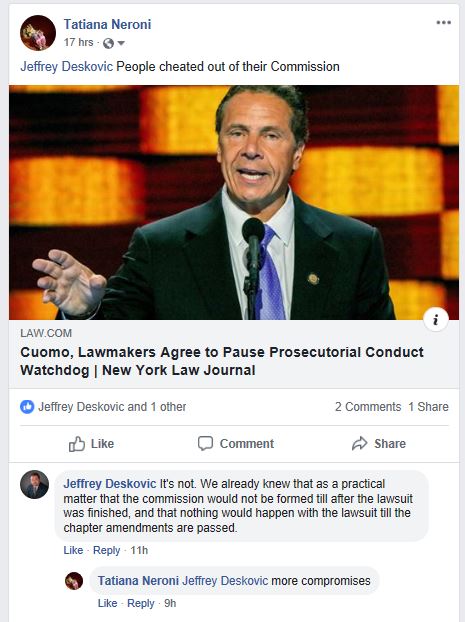 and without telling the public before Cuomo's reelection about that pre-agreement) shelving of the initial bill for the Commission - declared as a "revolutionary", "first-in-the-country" legislation to deal with wrongful convictions, ask Cuomo to veto the legislation as still unconstitutional.

“That investigation may include hearings attended by the defendant at which the prosecutor, victims, witnesses, and police officers may be compelled to testify about sensitive aspects of the defendant’s ongoing case,” Soares wrote. “These consequences will chill lawful prosecutorial conduct, impair prosecutorial discretion, and interfere with the operation of District Attorneys’ offices".

As I said before, Soares should be removed from office for this phrase alone - since he PRESUMES GUILT of the defendant by presuming that complaining witnesses in criminal cases are "victims" - before the conviction by a jury.

Unfortunately, the amendments to the bill ARE, indeed, very, very bad - and it does not save the bill that

Deskovic has his own - irreconcilable - conflicts of interest that he does not discuss when calling upon blanket public support - from the same public who he considers good enough to give support (and money) to his endeavors, but not good enough to populate PUBLIC Commissions to resolve what Deskovic's future colleauges, attorneys, have botched up - wrongful convictions.  For that public office, Deskovic said to me, there must be "standards" - and none less than the country's aristocracy,
may satisfy those rigorous "standards".

Once again, Deskovic claimed to me yesterday that only licensed attorneys, and only ABA-approved law professors may take public office to look at misconduct of licensed attorneys (prosecutors, defense attorneys and judges) who are causing wrongful convictions - because only they satisfy the necessary (according to Deskovic) "standards".

An interesting position, isn't it?  Or, rather, an early case of professional deformation and a down-his-nose look on his own supporters, the "ordinary people".

While advocating this position, Deskovic does not discuss his disqualifying conflicts of interest for this particular advocacy.

How good a lawyer and legal analyst he is, or is going to become may be revealed from the news of his recent lawsuit against 2 TV producers.

Deskovic was so eager for a TV series about himself and his projects, and for a promise of more money, that he handed over to 2 people $1,020,000 before signing a contract with them - which they took and, according to his pending lawsuit, used on their own "personal expenses".

Here is how the arrangement to hand over $1,020,000 without a contract transpired:

"In the spring of 2015, Deskovic answered an ad on Craigslist “seeking stories of personal interest for a show designed to … help individuals and entities who have been wronged,” court papers say.
After meeting the two TV execs behind The Security Brief TV, a company that also produces a justice-themed podcast that claims to have more than 250,000 weekly listeners, Deskovic told The Post that he was promised a percentage of the company, a co-branding with his non-profit The Jeffrey Deskovic Foundation for Justice, and a producer credit.
“There were ten ways to Sunday that we were going to make money on this venture which was going to be like a talk show,” Deskovic told The Post. “That’s not what happened.”
After handing over $1,020,000, Deskovic anxiously waited for a contract laying out his agreement with Viollis and Murphy. Four years later it has yet to arrive, court papers say."

How hungry for fame and more money one should be to

We are talking about a future lawyer here, graduating now from an elite law school, who has spoken to me about "standards" - that only licensed attorneys and ABA-accredited law professors are good enough to be appointed to the public office of resolving the mess created by … surprise! - licensed attorneys (prosecutors, defense attorneys and judges).
About a future lawyer who is making a living by giving lectures to lawyers, prosecutors, judges and police officers.  For licensing - mandatory continued legal education (CLE) - credit.
Which tells a lot about the quality, and necessity, of CLE.
Imagine how stupid Deskovic's future clients must be to hire him!
To hire a lawyer that openly admits, in writing to the court, in a lawsuit, to handing over $1,020,000 in return for PROMISES of more money and more fame, and a portion in the business, and no written contract?
A law student whose future livelihood, his licensing and continued CLE lecturing (CLE courses, to be acknowledged for mandatory licensing credits, must be certified by the judiciary) and ability to practice law, heavily depends on whether or not he refrains from criticizing his future regulator, the judiciary.
How can a person be perceived as a bona fide "advocate" against wrongful convictions when he

Players from BOTH sides of this bill are bad.

Moreover, they are not even players from opposite sides.

Both Deskovic and Soares belong to the same clan, the same aristocratic class - the American legal profession:

that CAUSES wrongful conviction, and fights - Soares openly, and Deskovic in a round-about way, by blocking members of the public from populating the Commission and getting to the bottom of real causes of wrongful convictions and real people that actually caused them.

There will be no end to wrongful convictions in this country, and in the State of New York if people will continue to allow the self-proclaimed aristocracy, the American legal profession, to dictate who is to take public office to look at their own messes.
Only people with no ties to the legal profession can bring an end to the mess.

I support free access of citizens to grand juries.

I support abolition of prosecutors' control and legal advice to grand juries.

Grand juries populated by "simply people", independent, not controlled in any way by the legal profession - are the answer to the wrongful conviction crisis.

Consider:
Do you think, in your right mind, that prosecutors will bite the hand that feeds them?

That they will prosecute judges for the crimes of violating people constitutional rights (it is a federal crime, 18 U.S.C. 242)?

Regardless of whether Cuomo will or will not sign the new amendments for the Commission for Prosecutorial Conduct.

Whether people are going to support abolition of judicially created prosecutorial and judicial immunity, the cause of wrongful convictions,

whether the people are going to support changes in laws regarding the grand jury, removing control over grand juries by the American legal profession - remains to be seen.

But, do not complain if you do not support actual measures that can actually help eliminate or reduce wrongful convictions, but support fake idols like Deskovic and his pet self-promoting projects.

Those projects were never designed to help people in the first place.

Posted by Tatiana Neroni at 8:42 AM