There is a lawyer licensed to practice in the State of New York. 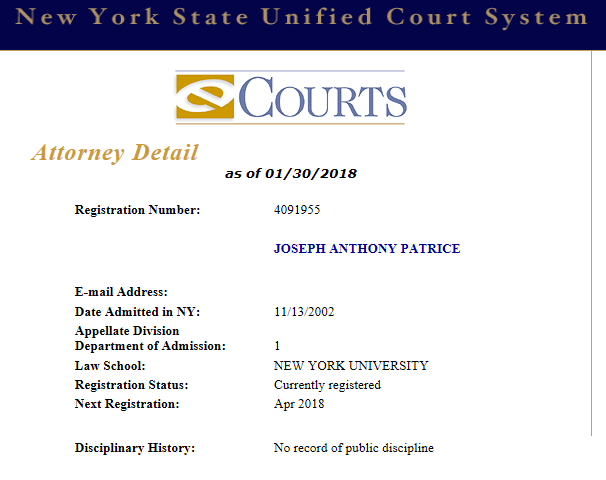 Joseph Anthony Patrice, or #JoePatrice, as he signs his writings on the blog Above the Law where he is a staff writer since 2012, is a former litigation attorney, and is still a licensed attorney in New York.

Joe Patrice was litigating in very large and powerful law firms, so, consumers would expect a lot of expertise and competence from such a lawyer - especially that he advertises his employment with Cleary, Gottlieb, Steen & Hamilton, and with Lankler Siffert & Wohl, as his accomplishments as a law blogger.

And, the main declared reason for attorney regulation in the United States at all and in New York State in particular is to ensure - for consumers - competence of licensed attorneys.

Now let's look at what attorney Joe Patrice says in his blawg article that he writes as a staff writer, for pay.

I actually wrote about Joe Patrice's pranks on this blawgs before, and both times I noted lack of attention to detail and lack of competence on key issues of law he was discussing.

But, Joe Patrice outdid himself in his recent blawg under the rubric of "Legal Ethics".

In this "legal ethics" blog Joe Patrice promotes rules of civil behavior of the Idaho State Bar by calling a colleague, an Idaho lawyer, an asshole for making a valid constitutional argument and arguing with that lawyer in terms like this: "suck it up, buttercup".

Let's see who is the asshole in the situation described.

On January 21, 2018 an attorney from the State of Idaho James Harris published an opinion in "Idaho Statesman" under the name:  "First, they came for the lawyers: Beware the Idaho Bar’s proposed limits on free speech".
http://www.idahostatesman.com/opinion/readers-opinion/article195896544.htmlRead more here: http://www.idahostatesman.com/opinion/readers-opinion/article195896544.html#storylink=cpy

Here is what attorney James Harris said in the first three paragraphs of the article: 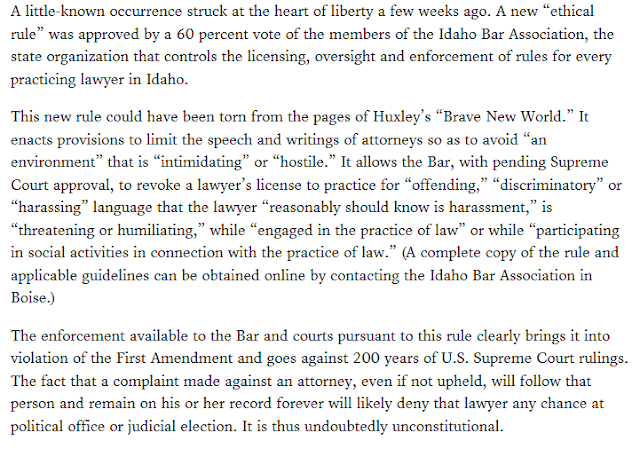 The essence of the statement is that attorney Harris asserts that the new "ethical" rule of the Idaho State Bar punishing attorneys for "harassment-by-speech" violates the 1st Amendment.

And attorney Harris is correct on that.  Punishing for speech-as-harassment does violate the 1st Amendment.

First of all, attorney Patrice fails to provide a link to the piece of attorney Harris that he so aggressively mocks - which is an elementary way to ensure a journalist's courtesy to his readers and his own credibility.

Apparently, it is easier to fight a shadow, without giving the reader access to the full piece being criticized, in order to be able to judge for themselves, which is not an ethical method in the first place.

Then comes this magnificent piece:

"Suck it up buttercup" (without a comma) is, apparently, the new ethical mode of address invented for lawyers admitted to practice in the State of New York.

What is even more interesting is the purpose of attorney regulation in New York that is so adamantly asserted by licensed attorney Joe Patrice.

While attorney regulation was introduced across the country, including in New York for the declared purpose of PROTECTING CONSUMERS from INCOMPETENT and DISHONEST attorneys, and not to protect the market of attorneys from their competitors,

attorney Joseph Anthony Patrice, New York attorney registration No. 4091955, with no record of public discipline, a staff writer on legal ethics for a prominent blawg Above the Law proudly and publicly promotes as ethical what a smart individual would have hidden with shame:

that the legal profession claims to be ITSELF a "beneficiary of the privilege" of the regulation (its own monopoly).

That's called "bait-and-shift", luring people into something by claiming it is beneficial for them, but then switching the arrangement to the one beneficial to the fraudster, by holding some kind of leverage over the people.  Bait-and-switch is a well-known fraud trick.

then introduction of the same regulation as if it was for the benefit of the consumer was fraud, right?

And should be repealed because it was introduced under false pretenses, right?

Especially because what constitutes the object of regulation, the "practice of law", is not clearly defined anywhere in the Untied States, ABA's attempt to define it ended up in 2002 with a threat from the Federal Trade Commission and the ABA withdrew that definition.

By the way, according to the ABA's own survey conducted in 2015, none of jurisdictions in the U.S. have a clear STATUTORY definition of what the hell the subject of attorney monopoly and regulation, practice of law, is.

There is no such clear STATUTORY definition in attorney Joe Patrice's licensing jurisdiction - New York.

And, there is no such clear STATUTORY definition in attorney James Harris' licensing jurisdiction - Idaho.

In Idaho, what constitutes the practice of law, according to the State of Idaho's own report to the ABA in a survey, is defined by "case law" (by courts on a case by case basis), and by a "rule" of Idaho Supreme Court (without any input by consumers/voters to the legislature). 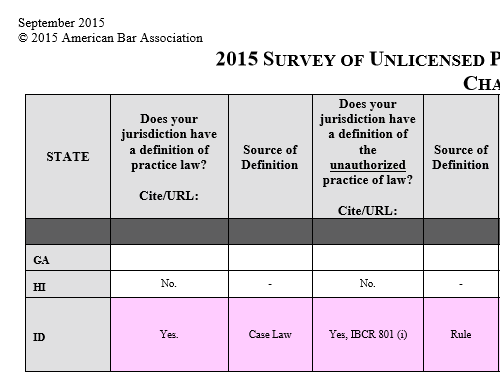 That is exactly what the U.S. Supreme Court has prohibited as unconstitutional back in 1972, fearing arbitrary enforcement by courts in the absence of clear STATUTORY definition AND infringement on people's constitutional rights.

In the licensing jurisdiction of Joe Patrice, the State of New York, it is no better.

In the same survey, the State of New York, reported regarding the definition of the object of attorney regulation, the practice of law: 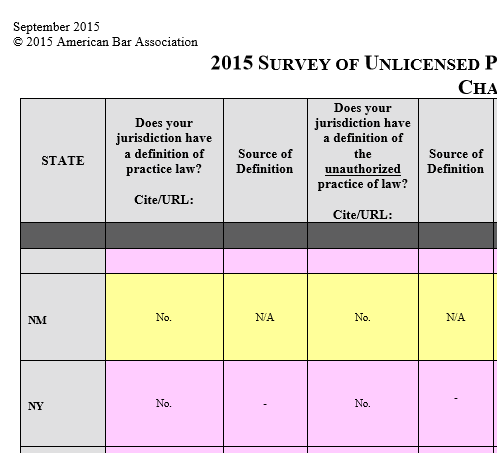 So much for "sucking it up, buttercup".

And, by the way, violation of the U.S. Constitution is a federal crime.

Such a bait-and-switch arrangement is, of course, impossible for a consumer , voter and taxpayer to "suck up" - especially because this unconstitutional scheme has already caused in the United States such an access-to-justice crisis that the majority of Americans cannot afford a lawyer, and have as a result to represent themselves pro se or forgo legal remedies at all.

What attorney Joe Patrice stresses is, once again, this:

That the attorneys, and not consumers, are the beneficiaries of regulation.

And that attorneys have an interest, through regulation, to maintain their image by:

And the unconstitutional, medieval, guild-like claim of "privilege" (a monopoly to quash competitors) in exchange for forfeiture of rights is, I remind my readers, made by a two-headed "honorable" profession, where the regulator of the profession (judges, also members of the profession) are also entrusted by the public to finally resolve all public disputes.

So who is going to resolve disputes AGAINST THEMSELVES as regulators of THEIR OWN profession?

And who is going to violate in such cases where their own power as regulators of the legal profession is challenged the main rule of an impartial adjudication - DO NOT SIT AS A JUDGE IN YOUR OWN CASE?

You guess - and that is the reason why this unconstitutional scheme has been saddling the American consumers, voters and taxpayers for over a century.

Yet, the enthusiastic slave of his own privilege Joe Patrice, while sitting on his high and privileged horse and mouthing out vulgarities towards his colleague for making a constitutional argument, in his zeal to uphold his slavery arrangement somehow overlooked to follow the main rule of any occupational licensing, and of attorney licensing in his own jurisdiction - maintain your competence.

That is the declared reason why regulation of attorneys even exists - to ensure for consumers that licensed attorneys are presumed-competent and knowledgeable.

There is a problem with Joe Patrice in that respect - because 4 years before his "suck it up, buttercup" outburst that a prohibition of speech as harassment is perfectly good and dandy and colleagues challenging the rule on constitutional grounds are crazy assholes, the top court of his own licensing jurisdiction, the New York State Court of Appeals struck a criminal statute punishing for harassment-by-speech - because it violated the 1st Amendment.

Now, who is the asshole?