Here is an interesting timeline for litigants and attorneys in Delaware County, New York.

On October 19, 2016 I've mailed, by certified mail, a criminal complaint against Delaware County Clerk Sharon O'Dell and her personnel who enters court judgment (Debra and Haley).

After that, things moved fast.

On October 25, 2016 Chairman of Delaware County Board of Supervisors James Eisel sent me a letter:

Here is the letter. 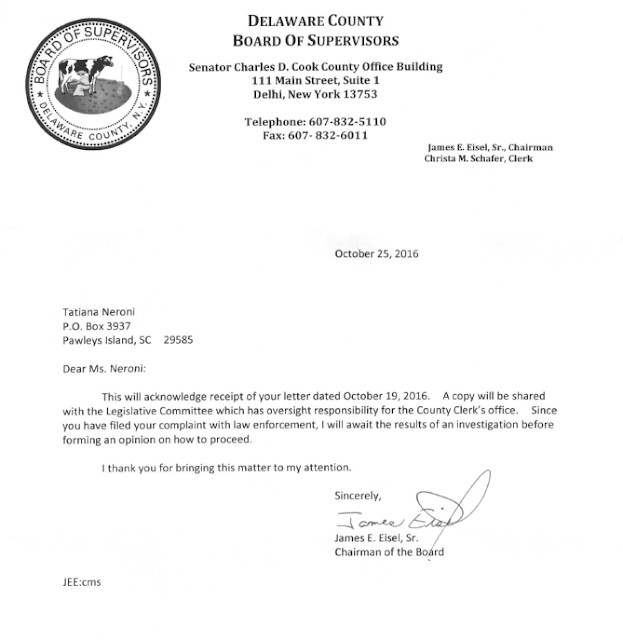 On October 26, 2016, the next day after Eisel's letter to me, Walton Reporter announced Sharon O'Dell's "retirement".

The article cited the same James Eisel claiming he will miss Sharon O'Dell greatly, and cited Sharon O'Dell lamenting that it was (suddenly, right before the elections, without allowing anybody to run as a replacement) it is "time for her" to go and that the courthouse personnel will greatly miss her cooking.

When I looked at the Walton Reporter article today, I did not see any more, on the right of the article, the paid advertisement of the Delaware-Otsego-Chenango (Del-Chen-O) Women's Bar Association, a new organization that has as members, two sitting judges, a former judge, three law clerks of sitting judges, and a variety of employees and relatives of judges, as well as attorneys who receive lucrative case assignments from those judges.

The same paid advertisement endorsing Sharon O'Dell and wishing her a happy "retirement" that Del-Chen-O also placed into the other local newspaper, the County Shopper - I published it here.

Yet, it was there several days ago, and I saved the article together with that advertisement, as evidence of Sharon O'Dell's endorsement by the organization where Nancy Deming, law clerk to Delaware County Family Court Judge Gary Rosa, is a member.

On October 28, 2016, the Chief of Delhi Village Police Michael Mills sent me a letter: 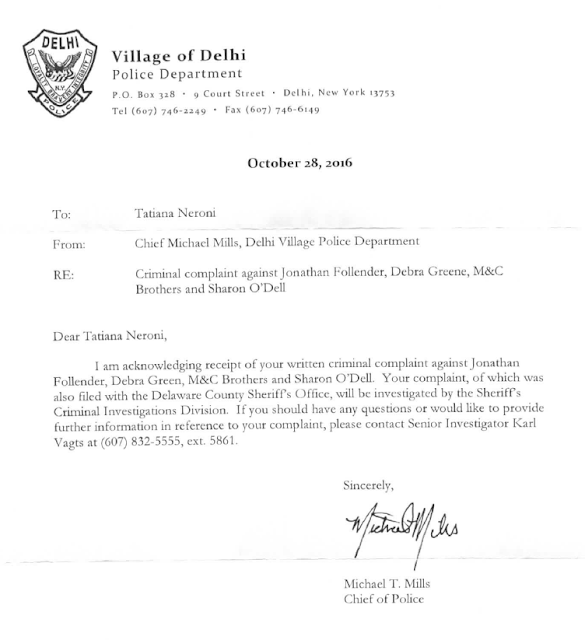 On the same October 28, 2016, Maria Almanza Kelso, the Chairman of the Republican Committee of Delaware County 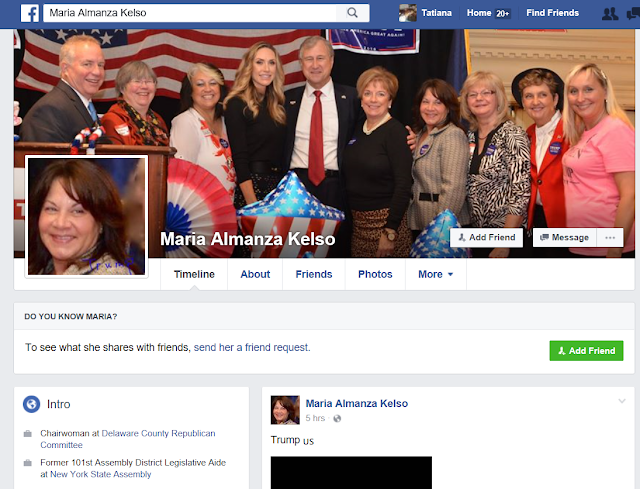 posted several pictures on Facebook from Sharon O'Dell's retirement party that, according to pictures and my personal knowledge of the room portrayed in the pictures, was held on the 2nd floor of the Delaware County Courthouse, in the "Grand Jury Room" also used as a courtroom for hearings and trials. 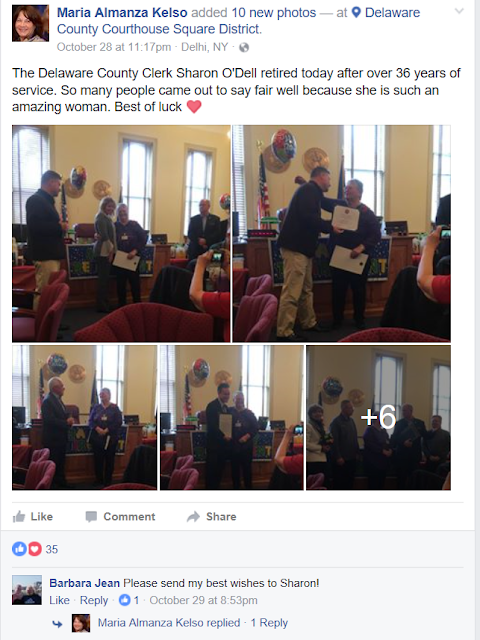 I note amongst the 35 "likes" the "like" of Lillian Browne of the Walton Reporter.

Here are the pictures that Maria Kelso posted on Facebook from Sharon O'Dell's "retirement party": 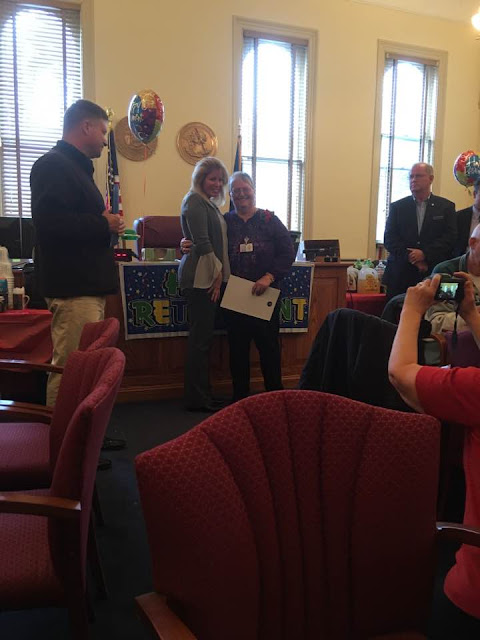 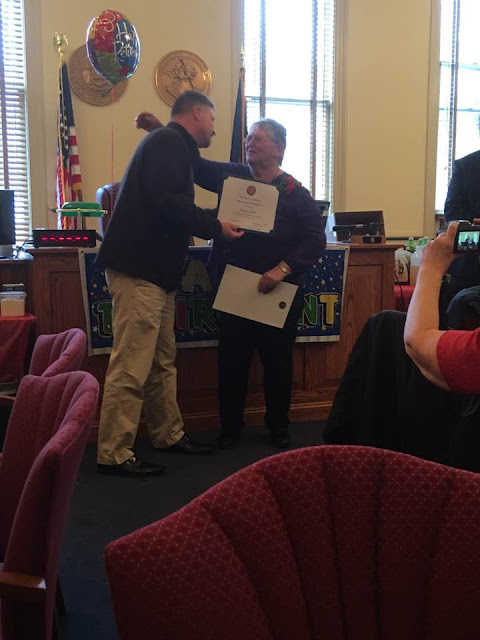 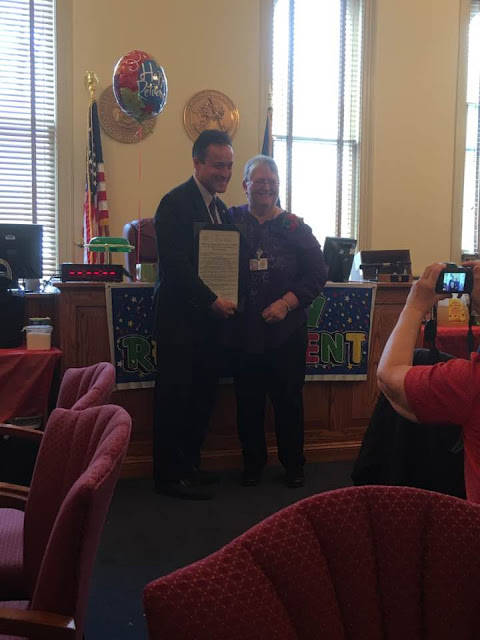 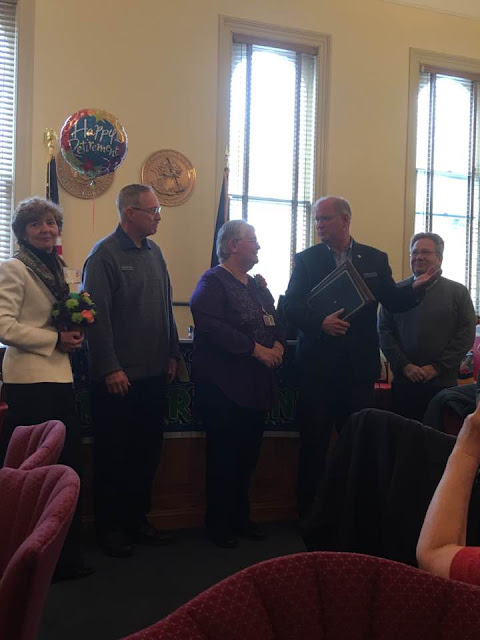 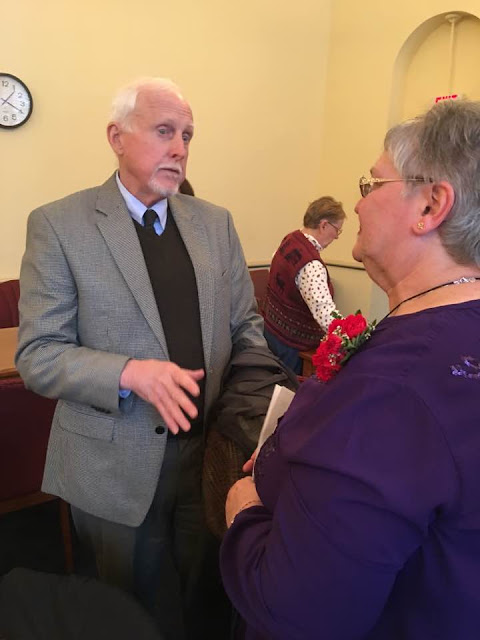 The guy speaking to Sharon O'Dell is Walton attorney Michael DeGroat, frequently assigned by local judges as a foreclosure referee. 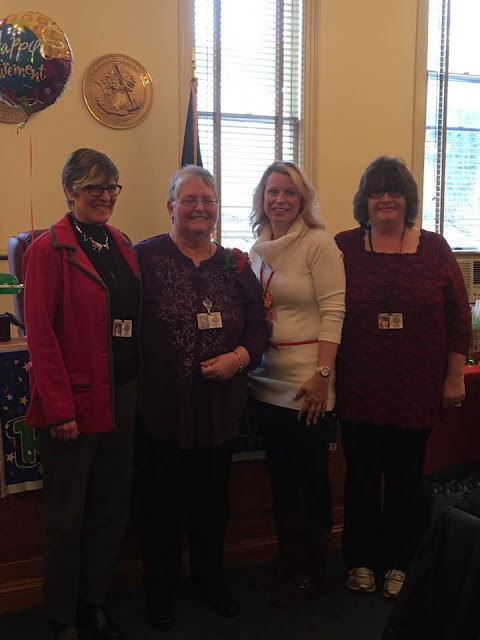 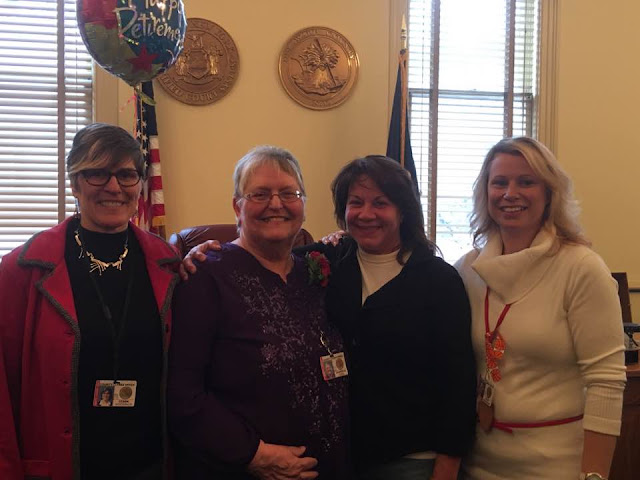 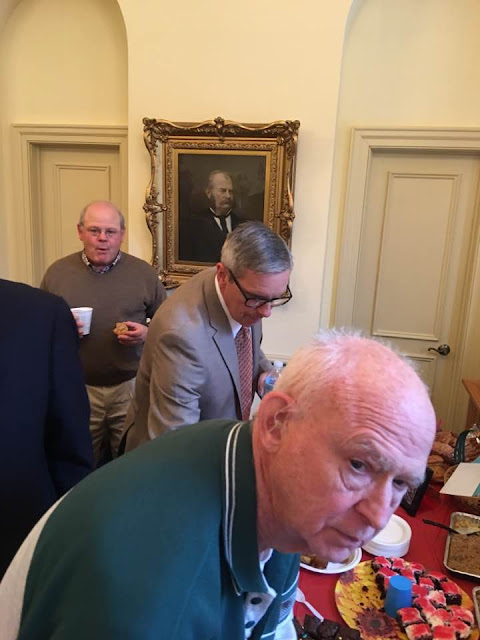 The guy in the background is Walton attorney Gary Greyson. 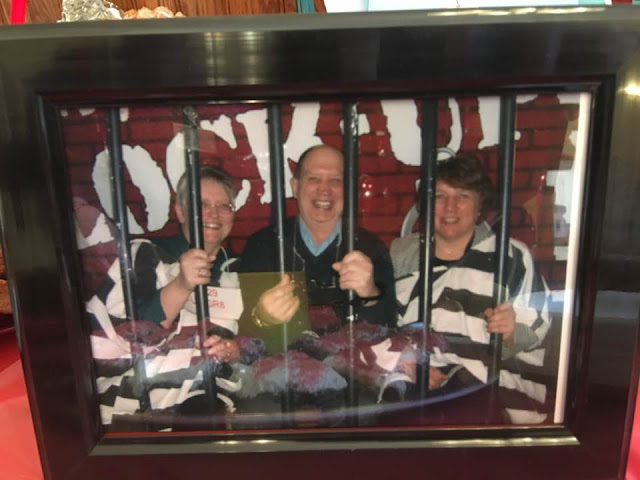 Sharon O'Dell is featured next to Delaware County Sheriff Thomas Mills (upon information and belief, Delhi Chief of Police Michael Mill's brother) - the one who is currently supposedly investigating her.

It is a big joke for both.

People normally do not mockingly portray themselves behind bars unless they are absolutely sure that they are so above the law that they will never get there.

Note this picture, too.

The man in glasses diligently loading up from the goodies on the table in a courtroom, to commemorate running from office ("retirement") of a court officer under criminal investigation of documented criminal behavior, is a criminal court judge and former Delaware County District Attorney Richard Northrup.

See him in one of my previous blogs receiving oath of office from a private attorney (former judge) Carl Becker.

There are only two local criminal court judges dealing with felonies - and my criminal complaint was of felonies, which is why the Sheriff's office is investigating:

Among the attendees of the "retirement party" are Sharon O'Dell's two subordinates, Debra Goodrich 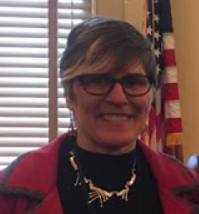 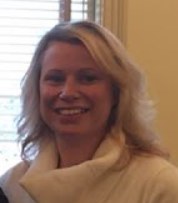 who are also the subjects of my criminal complaint, because the complaint was not only against Sharon O'Dell, but against her personnel who may have entered the fraudulent judgment with Sharon O'Dell "Enter" stamp - and there are only two employees in Delaware County Clerk's office who enter such judgment:

Debra Goodrich (left on the picture below) and Haley Gransbury (on the far left).

Yet, apparently, a criminal complaint filed against them with irrefutable supporting documentary evidence is some kind of a joke.

It could have been a joke yesterday - when FBI was also turned into a joke by presidential nominee Hillary Clinton.

Yet, today, with Donald Trump elected president, even though on a Republican ticket (and Sharon O'Dell is a Republican), Donald Trump will have to show voters who elected him that he is worthy of the trust put into him - starting with cleaning up the DOJ and FBI that caused the American people to be so disgusted with corruption in the government that they elected an outsider of the political establishment, even a not-so-attractive outsider, in a landslide.

The FBI and DOJ will have to walk on eggshells in anticipation of President Trump's cleanup, and might actually do their job properly, at least for a short period of time.

Since the feds are now also available for investigation of Sharon O'Dell's (and the crew's) crimes, because the fraudulent judgment was sent through mail across the state borders, as Sharon O'Dell knew it would be, it will not be only brothers Mills who would be investigating, and it will not be only Judges Rosa and Northrup available to preside over the criminal case - when both judges already disqualified themselves by wishing the "happy retirement" of Sharon O'Dell, and, for Northrup, even allowing her to hold a "retirement party" in  courtroom which he attended.

It is disgusting when the County establishment acts like a criminal investigation against a county official for commission of felonies in a courthouse:

Hopefully, not for long.

And, be aware - while Sharon O'Dell "retired", the two other people who may have filed a multi-thousand dollar fraudulent judgement contrary to a court order, but at a request of an attorney/judge, obviously thinking that I am so below the law that anything against me goes - remain on the job, and can do to anyone else what they have done to me.

Beware.
Posted by Tatiana Neroni at 6:46 AM