#TheThiefJudgeJanetDiFiore - of the State of New York - and her generous donation of other people's money to a powerful nonprofit, one day before her confirmation hearing in the NYS Senate

I wrote on this blog, multiple times, about the corrupt new Chief Judge of the New York State Court of Appeals Janet DiFiore.

I publicly opposed, through written statements to the New York State Senate (NYS Senate did not allow testimony of witnesses against DiFiore who wanted to testify, including myself), the appointment of Janet DiFiore to this position and publicly asked the senate - a request which the senate ignored - to criminally investigate Janet DiFiore's activities.

DiFiore also readily showed her corruption and payback to those who were backing her up, as well as her total lack of integrity and the fact that she is using her high position for her own personal gain in a court case I wrote about which DiFiore apparently fixed fixing for a gaming-regulator, the industry that supported DiFiore's benefactor NYS Governor Andrew Cuomo.

DiFiore chose to hear a case of a subdivision of New York government where DiFiore's own husband Dennis Glazer worked and decided it in favor of her husband's agency.  DiFiore not only did not disqualify herself from that case, but wrote the opinion in that case favoring her husband's agency.  Not to mention that her husband was appointed to that agency by Cuomo after DiFiore saved Cuomo's hide from a corruption investigation by corrupt acts in her position as the Chairwoman of the New York Public Ethics Commission.  Talking about letting foxes into chicken coups.

To add to the picture, recently some reports emerged about Janet DiFiore's "generous donation" of $940,000 to law internships from her re-election campaign for the position of the Westchester County District Attorney.

The media so far tended to glorify that donation instead of characterizing it for what it is - improper allocation of donations to the election campaign.

Yet, the whole story about the donation - made in January of 2016, but filed and reported only in July of 2016, in obvious violation of the law that required to include the fact of the donation into the January, and not July report, begs investigation of the "donation" story.

DiFiore was given donation towards her re-election to the Westchester County DA's office.

I preserved the donation reports for Janet DiFiore available from the NYS Board of Elections before posting this blog, in view of the government's usual swiftness to remove potentially incriminating public records from public view.

When donations are made for a certain purpose and by certain individuals, and when the purpose to be re-elected for the Westchester DA's office is no longer a valid purpose because of the appointment of Janet DiFiore as New York State Chief Judge, donations had to be returned to those who gave them.

Yet, Janet DiFiore, instead of returning donations back to the donors, gave the donors' money to a certain non-profit, the Fund for the City of New York.

Here is the basic information about that nonprofit given by a major nonprofit database.

Here is the tax report form of that nonprofit from 2013 (the latest available online).

First of all, I doubt that Janet DiFiore had a right to give the donations to anybody other than the donors.

Of course, the donors are now hostages of Janet DiFiore's high status and may be afraid to say that the Chief Judge of the State of New York stole their money - money given towards her election campaign for the seat of the Westchester County DA - when Janet DiFiore was appointed the Chief Judge of the State and no longer wanted to be re-elected as Westchester County DA.

Yet, the donation that was made on January 19, 2016, ONE DAY BEFORE Janet DiFiore's confirmation hearing in New York State Senate.

Not too corrupt, is it?

While I lack information about the current officers and employees of the Fund for the City of New York, the latest published IRS report shows the following names (for 2013), and I doubt that those names changed, since people are usually carried out of these "funds" feet first: 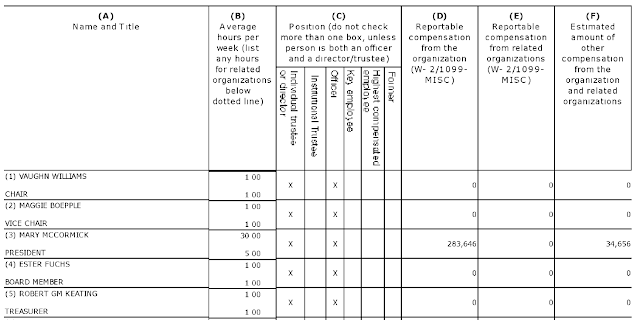 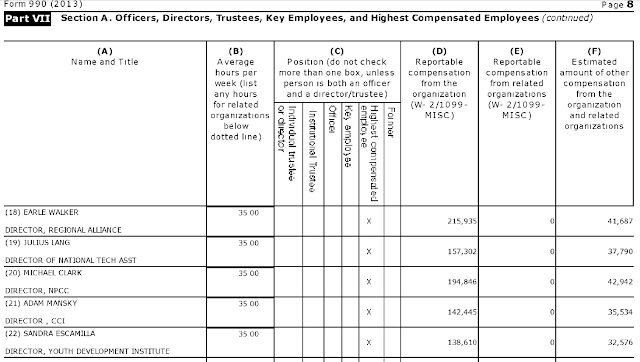 I encourage my readers, as I will do myself, to research backgrounds of these people and their connections to:

I already wrote about one case that DiFiore apparently fixed - for an organization which is part of New York government where DiFiore's husband plays a major role.

With DiFiore's prior record of apparent corruption - which authorities apparently do not want to touch - DiFiore feels she can continue with her corrupt ways for an eternity.

I will publish results of my research into this interesting donation - as well as into whether there are connections between donations to DiFiore - made at any time to any of her election campaigns - and DiFiore's decisions as a judge or as a District Attorney.

That research requires a lot of work and time, and I request my reader's patience, but I will complete it and I will publish the results.

I can tell you right now that Janet DiFiore received donations towards her re-election as Westchester County DA every single year between 2006 and 2016, which seems extraordinary to me since the actional elections to that position happen only once in every 4 years.

I will publish my findings.

But, it is interesting to mention that recently, just a week ago, an FBI investigation was started against financial manipulations of public funds by a high-ranking judge in the State of Georgia, Judge Brenda Weaver.

Maybe, it is time for the FBI to look at DiFiore's "generous donation", too - as well as at DiFiore's prior and recent trail of apparent corrupt conduct?

Since her campaign fund does not have money any more, she will now have to find her own money, or more generous donors, to get her out of the mess she created and continues to create by her apparent dishonesty and greed.