I already wrote on this blog, with a link to a telephone recording, as to shenanigans of judicial candidate Porter Kirkwood, friend and colleague of Judge Carl Becker (who runs out of his office at the end of this July long before his term is up after fighting tooth and claw for being re-elected for that term).

I already wrote that Porter Kirkwood is the "best candidate" for Delaware County to replace Judge Becker since he is made of the same mold as Becker - incompetent, unprincipled and with a nasty temper smoothed out with smiles to and catering for necessary people, and about "hereditary" misconduct that will be continued by Kirkwood after Becker leaves office - if Kirkwood is elected in Becker's place.

I provided evidence (telephone recording) indicating that Porter Kirkwood is either lying that he does not know anything of the policies of the Delaware County Sheriff's department affecting people's constitutional rights, or he confesses to his incompetence in not knowing about such policies.

Compare the recording of Delaware County's public official in charge of its jail explaining me about the alleged long-standing policies of searching attorney's files as a pre-requisite of visits of their clients, the direct link to the recording is here, (a made-up policy to prevent me from visiting my then client Barbara O'Sullivan in jail, to prevent any meaningful representation of her), and what Porter Kirkwood tells me that he does not know of any such policies, the same link.

Now for the new masterpiece that has to have Porter Kirkwood's hand all over it - a "legal disclaimer" on the website of Delaware County (supported by taxpayer's money).

First of all, the font of that "disclaimer" is black on dark blue background.  So, if you are not computer savvy, you will have to squint heavily to read what is there in the disclaimer.

If you are a little savvier, you will highlight the entire disclaimer, and then the font will become white.  That is what I did to make snippets of that disclaimer for this blog - and then the highlighting within the snippet somehow became black on gray, but still more readable than black on dark blue.

I do not think that the choice of font and background in the "legal disclaimer" is accidental.

I believe that the choice was intentional, so that, on the one hand, the disclaimer is there, and on the other hand, not many people would strain themselves to read it, and especially analyze it.

Here is the "legal disclaimer" for the STOP-DWI program of Delaware County, New York: 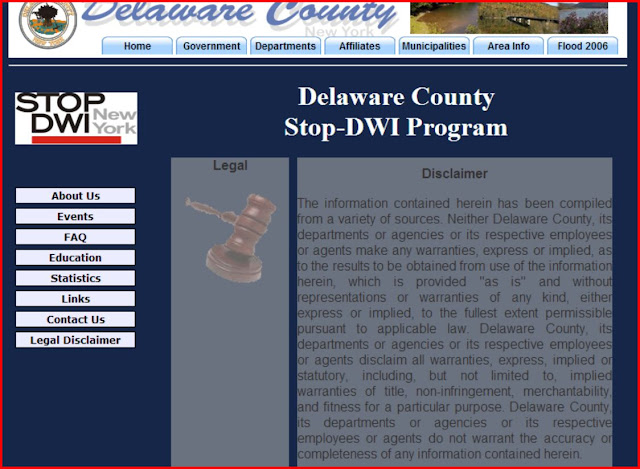 Yet, Delaware County, while providing information to the public on a taxpayer-supported website, attempts to claim that it gives the public "no warranties, express or implied", as to the "accuracy or completeness" of information contained on the website about the STOP-DWI program.

In other words - read it, but do not believe a word, because what we say might not be true. 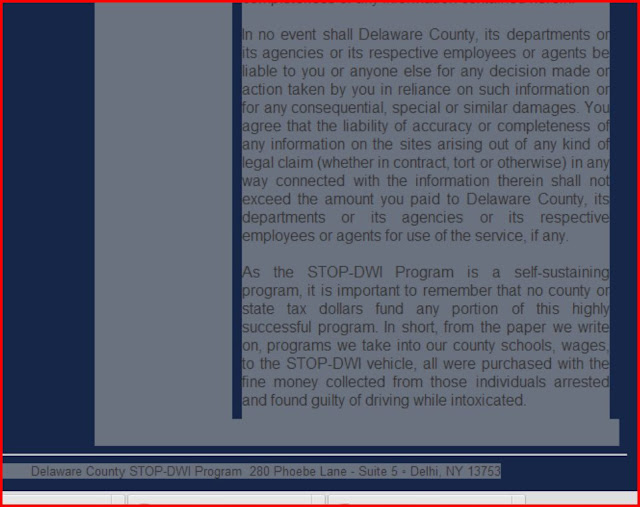 The next marvel is when the website directly addresses you and states that Delaware County will not be liable to you in any kind of damages if you dare to sue Delaware County for anything contained on its website.

The very next marvel is that "you" (whoever you are) somehow "agree that the liability of accuracy or completeness of any information on the sites arising out of any kind of legal claim (whether in contract, tort or otherwise) in any way connected with the information therein shall not exceed the amount you paid to Delaware County, its departments or its agencies or its respective employees or agents for use of the service, if any."

Who it is that unknown "you" and what is the condition of the agreement - seeing the "legal disclaimer" on the Internet, I guess - and why, let's say, a civil rights lawsuit that may be brought against Delaware County based on its statements on its own website, should not "exceed", by agreement no less, whatever monies "you" paid to Delaware County "for use of the service, if any" - nobody knows.

And, of course, nobody knows what was the reason for inclusion into the "legal disclaimer" of the statement that all expenses of the Delaware County's STOP-DWI programs are funded by fees provided by individuals convicted for DWIs.

By the way, since Delaware County is not the most sought tourist destination, in fact, it looks like a ghost zone and its towns look like ghost towns, the only people passing through the county and stopped for alleged DWIs are its own residents, who are predominantly poor and poorly educated.

And no "legal disclaimers" will help hiding the inconvenient truth that the STOP-DWI program, while declaring its good intentions, is a program based on financial corruption of government officials in order to increase convictions and revenues for the local government - and, I am sure, that perverse incentive, as I wrote in my previous blog post, lead to wrongful convictions, possibly, massive wrongful convictions.

And another truth is that the Delaware County residents will be saddled with the author of this "legal disclaimer" Porter Kirkwood, now as a judge, as unprincipled and as incompetent as he was in his position as a County Attorney, if they do not come to those voting booths and do not say "no" to Porter Kirkwood.

Delaware County residents who suffered for nearly two decades from the petty tyrant Becker, deserve better than two petty tyrants Kirkwood and Northrup who are about to replace Becker.

Do not allow the Hydra that Judge Becker was to sprout two ugly heads instead of the one that is leaving.

Vote "no" as to both Kirkwood and Northrup.  Come to those voting booths, and tell your family, friends and neighbors to come and vote "no".

You will save yourselves and your loved ones, for years to come, from a lot of misery.

Posted by Tatiana Neroni at 7:13 PM